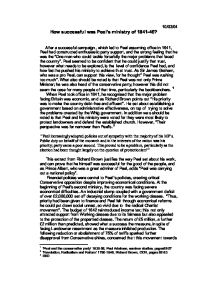 10/03/04 How successful was Peel's ministry of 1841-46? After a successful campaign, which led to Peel assuming office in 1841, Peel had constructed enthusiastic party support, and the strong feeling that he was the "One man who could tackle forcefully the major problems that faced the country". Peel seemed to be confident that he could justify that trust, however what needs to be explored, is the level of confidence Peel had, and how fast he pushed his ministry to achieve that trust. As Sir James Graham, who was a pro Peel, can support this view, for he thought" Peel was rushing too much". What also should be noted is that Peel was not only Prime Minister; he was also head of the conservative party; however this did not seem the case for many people of that time, particularly the backbenchers.1 When Peel took office in 1841, he recognised that the major problem facing Britain was economic, and as Richard Brown points out "His priority was to make the country debt-free and affluent". He set about establishing a government based on administrative effectiveness, on top of trying to solve the problems created by the Whig government. In addition was should be noted is that Peel and his ministry were voted for they were most likely to protect landowners and defend the established church. ...read more.

The issue raised enough support for Lord Chandos' resignation, and disillusioned many agriculturalists in the Party. The working class enjoyed a lower cost of living praising the sliding scale too for its attempt to stabilise bread prices. The financial measures worked profitably to the nation as a whole, with trade reviving, exports increasing with unemployment falling.4 The improving economic conditions undermined the chartist movement and suppressed much social unrest, and again as Prince Albert underlines "If the country gets richer everyone will get richer". However, the strains in government were growing, not only on matters of principle, evidently after Peels threat to resign over the Sugar Bill. Peels domination over Party members created great tension and resentment, labelling Peel as arrogant and stubborn, a matter that presented itself even more during the ministry's undertaking of social reform. Given the overwhelming domination of domestic problems and policies during the 1840's, foreign affairs had little impact on the progress of Peel's ministry. However, Catholiscism in Ireland proved a strenuous task for Peel to resolve, and as Peel's Irish reforms did little to gain nationwide support, Peel felt that the Irish problems could be dealt not with economics, but institutional reform especially through education. "He undertook a 'Plan of Conciliation,' wanting to appease and convince the Irish the benefits of the Union, whilst also repressing the social unrest caused by O'Connell". ...read more.

The ongoing Famine in Ireland just exploited the urgency and rationalization for repeal. The repeal saw the last obstacle for 'Free Trade' much to industrial and the Anti-Corn Law League delight. The working classes saw the prospect of cheap bread to support the repeal, as did the Chartist movement. The consequences of the repeal did justify Peel's hopes for the protection of the landed interest too, despite its intense opposition. In addition, as Richard Brown argues: "Economically the repeal did not have a negative impact on the agriculturalists", as the rising population and expanding demand for British produce resulted in increasing rent tolls and farming profits. It was Peel's determination to act according to public interest that allowed him to ignore the narrow landed interest that his Party reflected.6 As Paul Adelman clarifies: "The government was essentially 'Peel's ministry'; he had created it and in the end he was to destroy it".7 Peel was able to put the nation above Party, and so his reforms were always more popular with the country, than with the party. Therefore Peel and his ministry helped the needs of the working and middle classes, and not just the narrow landed interest that his party suggested, outlining a successful achievement. Nevertheless he received criticism for ignoring his Party's wishes, significantly due to the fact he was leading a predominantly Protectionist Party as the 1841 election outlined, and so by consistently betraying the promises of Protectionism, he lost Party support. ...read more.