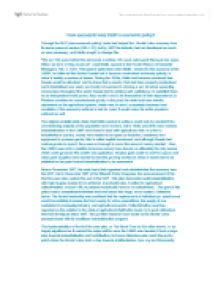 How successful was Stalin's economic policy? Through the NEP (new economic policy) Lenin had helped the Soviet Union recovery from its seven years of warfare (1914-21), but by 1927 the industry had not developed as much as was necessary, and Stalin sought to change this. "We are 100 years behind the advanced countries. We must make good this lag in ten years. Either we do it, or they crush us!" Josef Stalin, speech to the Fourth Plenum of Industrial Managers, Feb. 4, 1931. This speech epitomises what Stalin wanted for the economy of the USSR, he believed that Soviet Russia had to become modernised extremely quickly, in order to satisfy a number of issues. During the 1930s, Stalin had become convinced that Russia would be attacked, and he knew that a country that had been properly modernised and industrialised was weak, and could not succeed in winning a war, let alone spreading communism throughout the world. Russia had to achieve self-sufficiency, to establish them as an independent world power; they would have to rid themselves of their dependence on Western countries for manufactured goods. ...read more.

The Soviet leadership was confident that the replacement of individual peasant farms would immediately increase the food supply for urban populations, the supply of raw materials for processing industry, and agricultural exports. Collectivization was thus regarded as the solution to the crisis of agricultural distribution (mainly in grain deliveries) that had developed since 1927. This problem became more acute as the Soviet Union pressed ahead with its ambitious industrialization program. The implementation of the first five year plan, or The Great Turn as it is often known, was hugely significant as it marked the major shift in were the USSR was headed, it took a huge step towards industrialisation and mobilisation, but some historians also mark this as the point where the Soviet Union took a step towards totalitarianism, tyranny and inhumanity. In mid-1929, less than 5% of peasants were on collective or state farms, but in January 1930, Stalin announced that around 25% of the grain-producing areas were to be collectivised with the coming year. This news was greeted with some surprise; many thought that this would have been a voluntarily process, taking place at a much slower rate. ...read more.

The increased need for mass production caused wealthy businessmen to start pulling strings so that their particular project did not suffer, this resulted in certain industries overproducing, and others under producing. But managers and officers were too afraid to admit anything was wrong as they didn't want to be accused as being an enemy of the plan. In conclusion, although some sectors showed marked improvement, because much investment had to be contributed to the collectivisation programme, many targets were not met, the first five year plan although not meeting its targets, proved to kick start the Soviet economy. The second five year plan changed the emphasis slightly, the over optimistic targets were scaled back and more detail was put into each section of the industry, so that the increases in production could be consolidated. This organisation through emphasis on consumer goods and improvements to the railways and the increase in training programmes resulted in 1934-36 being known economically as 'good years'. The third five year plan continued were the last left off, heavy industry continued to grow and the emphasis on armaments increased rapidly, although the plan only lasted 3 and a half years as the second world war intervened. ...read more.