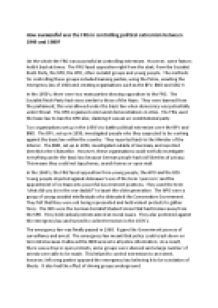 How successful was the Federal Republic of Germany in controlling political extremism between 1949 and 1989?

Transfer-Encoding: chunked ﻿How successful was the FRG in controlling political extremism between 1949 and 1989? On the whole the FRG was successful at controlling extremism. However, some factors held it back at times. The FRG faced opposition right from the start, from the Socialist Reich Party, the SPD, the KPD, other socialist groups and young people. The methods for controlling these groups included banning parties, using the Police, enacting the emergency law of 1968 and creating organisations such as the BFV, BND and GSG-9. In the 1950?s, there were two main parties showing opposition to the FRG. The Socialist Reich Party had views similar to those of the Nazis. ...read more.

This means they could not tap phones, search homes or open mail. In the 1960?s, the FRG faced opposition from young people, the APO and the SDS. Young people objected against Adenauer?s use of the term ?year zero? and the appointment of ex-Nazis into powerful Government positions. They used the term ?what did you do in the war daddy?? to taunt the older generation. The APO were a group of young socialist intellectuals who distrusted the Conservative Government. They felt that they were not being represented and held violent protests to gather force. The SDS were the German Socialist Student Union that had broken away from the SPD. ...read more.

This was an anti-terrorist operation unit whose role was to act against terrorist groups. It had close links to the British SAS and the US Army Delta Force and operated worldwide. In October 1977, a GSG-9 team managed to rescue hostages on a plane hijacked on the way to Frankfurt. When the Baader Meinhof gang started its bombing and violent protest campaigns in the 1970?s, the GSG-9 successfully arrested some of the members. In conclusion, the FRG was generally successful in controlling most political extremism during the period from 1949 to 1989. However, its methods in preventing extremism such as the passing of the emergency law and setting up of the BNF and BND, caused it to become unpopular amongst left-wing parties concerned about civil liberties and this led to more political unrest. ...read more.