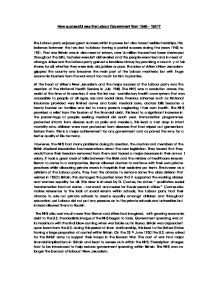 How successful was the Labour Government from 1945- 1951? The Labour party enjoyed great success whilst in power but also faced terrible hardships, this balance between the two led to labour having a partial success during the years 1945 to 1951. Post war Britain was in dire need of reform, over 1/4 million houses had been destroyed throughout the blitz, factories were left dishevelled and the people were tired and in need of change. Atlee and the Labour party gained a landslide victory by promising a country of fair shares for all, whether they were sick, old, jobless or poor. The idea of Atlee's New Jerusalem gripped the country and became the main part of the Labour manifesto but with huge economic burdens from the war was it too much for him to promise. At the heart of Atlee's New Jerusalem and the major success of the Labour party was the creation of the National Health Service in July 1948. The NHS was a revolution across the world at the time of its creation, it was the first non-contributory health care system that was accessible to people of all ages, sex and social class. ...read more.

President Truman quickly ended the loans to Britain after the war had finished and started to collected the $3.5 billion that Britain owed them. This left Atlee's New Jerusalem looking very unlikely, with the majority of money they would need going to finance their debts overbroad. Atlee sent economist John Maynard Keynes to the Federal Reserve in America to obtain either a cash gift or a interest free loan from them. After vigorous debates and 3 months of hard work Keynes left America with a loan of $4 billion, however with high interest. Keynes stated that the loan was only just 1/2 the amount that Britain needed vitally to rebuild post war Britain. It took until December 2006 for Britain to finally pay of their loan to America. This left America with a large amount of control with the parliamentary changes within Britain. Through this period of want, Britain found it very difficult to pay its debts to America. The majority of British goods were exported abroad and sold for a cheaper price leading to less money coming into the country. This lack of financial control lead to a period of austerity within Britain, families didn't leave rationing until the mid 50's with new items being rationed that had been freely available during the war such as bread. ...read more.

The government passed the British Nationality Act which gave 800 million people the right to live in the Britain as a British citizen. This lead to a mass wave of immigration with people coming from all over including countries such as India and Africa. This change was one of the key steps in creating the culturally rich country that we live in today. Overall, while the Labour party had some difficulties whilst in power they did succeed in creating the building blocks for the Britain we live in today. If it wasn't for the work of Atlee and Bevan we may never have made such progress as we did. The major problem with the Labour party was the time that it was in power, there was also going to be massive economic debts to pay after war and the cost of rebuilding Britain after the war was inevitably going to costly. If the Labour party had spent their money on less economically demanding projects they may have had a better run in power, and perhaps been voted in again when they could have implemented the more costly projects such as the NHS. Other historians such as Hennessy also agree that they "laid the foundations for what is great about post-war Britain." ?? ?? ?? ?? ...read more.