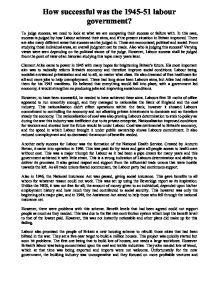 How successful was the 1945-51 labour government? To judge success, we need to look at what we are comparing their success or failure with. In this case, success is judged by how Labour achieved their aims, and if the present situation in Britain improved. There are also many different areas that success can be judged in. These are economical, political and social. From studying these individual areas, an overall judgment can be made. Also who is judging this success? Varying views were seen depending on the political stance of the judge. However, Labour success shall be judged from the point of view of an historian studying this topic many years later. Clement Atlee came to power in 1945 with many hopes for brightening Britain's future. His most important aim was to radically reform Britain's economy and therefore improve social conditions. Labour being socialist envisioned privatisation and aid to all, no matter what class. He also dreamed of free healthcare for all and more jobs to help unemployment. These had long since been Labours aims, but Atlee had reformed them for his 1945 manifesto. He believed that everything would fall into place, with a government led economy, it would strengthen so producing jobs and improving social conditions. ...read more.

Independent historians, generally agree that Atlee's government was the most successful Labour government, and possibly one of Britain's most influential governments. At that point in time, even left and right wing historians believed that Labour had been successful in this first year. However, Labours success was short lived. During the winter months of 1947, the newly nationalised pits suffered a coal shortage. Many industries were shut down, as generating stations were not receiving enough coal. This had detrimental effects on morale and production. The government could do nothing about his and it turned into a public relation fiasco and doubt was placed upon the government's economical abilities. This problem was eventually solved when the spring arrived. But more followed in its wake. A major crisis was to hit the Labour Government. After loans taken from the USA, they promised to allow the pound to float on the stock market and be able to be converted into international currencies. This however was not as successful as it was thought it should be. Due to the weakness of the British economy, people poured all their money into American dollars, this caused the value of the pound to plummet. ...read more.

Nationalisation was in place in major industries, the NHS, although not hugely successful, was running and benefits had improved. Labour had not achieved their goal for housing, although the project had been started and the reason for its failure was the economic situation in Britain. They had just finished a costly war that had nearly financially crippled them and they were financially dependent upon America for loans. Which also caused the pound to devalue significantly as they allowed it to float in 1947 and it crashed. This was to have major repercussions as Labour struggled to rectify that mistake. Labour was incompetent economically, they made many mistakes and had to reduce benefits and public spending to try and improve the situation, which went against their policies. However, it is possible that Labours failings were due to a poor economic state when they came into office, and a weakened world economy made it hard for a total recovery, however some ground was made. At a time when the world was weak anyway, due to war costs, Britain would struggle anyway to recover, and only the help from America made survival possible. Atlee had not succeeded, in the sense that Britain was on its feet and economically stable, however, the state of Britain had improved, and it can be said that had Labour had another five years, they might have achieved their aims. ...read more.