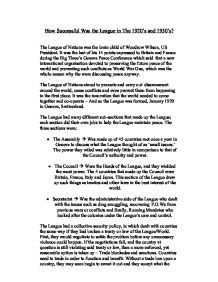 How Successful Was the League in The 1920's and 1930's? The League of Nations was the brain child of Woodrow Wilson

How Successful Was the League in The 1920's and 1930's? The League of Nations was the brain child of Woodrow Wilson, US President. It was the last of his 14 points expressed to Britain and France during the Big Three's Geneva Peace Conference which said that a new international organisation devoted to preserving the future peace of the world and preventing such conflicts as World War One, which was the whole reason why the were discussing peace anyway. The League of Nations aimed to promote and carry out disarmament around the world, cease conflicts and even prevent them from happening in the first place. It was the innovation that the world needed to come together and co-operate - And so the League was formed, January 1920 in Geneva, Switzerland. The League had many different sub-sections that made up the League; each section did their own jobs to help the League maintain peace. The three sections were: * The Assembly --> Was made up of 45 countries met once a year in Geneva to discuss what the League thought of as 'small issues.' The power they wiled was relatively little in comparison to that of the Council's authority and power. * The Council --> Were the Heads of the League, and they wielded the most power. ...read more.

45 countries did not represent the world's best interests. They also only met once a year to discuss small, trivial things. By the time they get to discuss something important, it had probably already passed them by. * * * * * * * * * * * * * * * * In the 1920's the League had many successes and failures because of their actions. Successes: o The League helped refugees from conflicts and safely re-accommodated them. o The International Court of Justice was set-up for trials against countries. o The International Labour Organisation improved the working conditions of the common man. o The League managed to solve a dispute between Finland and Sweden over land ownership of the Aland Islands. o The Secretariat reduced the number of cases of leprosy. o The League devised a plan to rescue the Austrian economy from ending in a depression. o Continued administrating the Port Danzig and Zbar-land via running mandates. o The League prevented a conflict between Greece and Bulgaria from breaking out. o In 1926, Germany was allowed to join the League. The things in which they had successes over were very small issues, such as the working conditions being improved or reducing leprosy. Failures: o The League was unable to solve an argument between Lithuania and Poland over who had the rights to own Vilna; another small country. ...read more.

In October 1935, Italy invaded Abyssinia. The Collective Security policy was not carried out fully; they merely negotiated and put a light trade ban upon them which still allowed them to trade oil and petrol. By March 1936, the League had taken a tougher line of action but it was far too late. The League had failed and in July 15th all Italians sanctions were over. And at this point, the League was seen as broken and corrupted. Germany saw that no action was taken against Italy and Japan and was encouraged to attack. The League was a very good idea which could have ended the world's problems because they were working together. But due to America voting against joining the League, it was destined to fail. The cracks in the League grew from there, with the constant accusations of racism and nothing more than a club for winners. The contradiction of free-trade and trade-bans made no sense and failed to work. The League had many problems along the way, failing to solve disputes and conflicts along with not passing any new world order laws. The cracks were split wide open once the depression struck, when many of the countries became isolationist and came close to becoming communists. While the League was in ruins trying to keep the peace and working on saving their own economy, countries decided to take the chance to invade to make up for past grievances. ...read more.