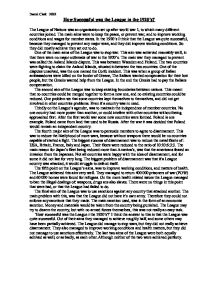 How Successful was the League in the 1920's?

How Successful was the League in the 1920's? The League of Nations was an organisation set up after world war 1, to which many different countries joined. The main aims were to keep the peace, or prevent war, and to improve working conditions and wages for member states. In the 1920's I think that the League wa quite successful, because they managed to prevent any major wars, and they did improve working conditions. So they did mostly achieve they set out to do. One of the main aims of the League was to stop war. This aim was achieved resonably well, in that there were no major outbreaks of war in the 1920's. The main war they managed to prevent was called the Aaland Islands dispute. ...read more.

No one country had more power than another, or could intefere with other countries without being approached first. After the first world war some new countries were formed. Poland is one example. Poland came from land that used to be Russia. After the war it was decided that Poland would remain an independant country. The fourth major aim of the League was to persuade members to agree to disarmament. This was to reduce the likelyhood of more wars, because without weapons there would be no countries capable of started a fight. The biggest success of disarmament was to reduce the naval fleets of : USA, Britain, France, Italy and Japan. Their fleets were reduced to the ratio of 10:10:6:3:3. The main reason for Japan's fleet being reduced more than America's, was that the americans feared an invasion from the Japanese. ...read more.

Therefore they could not enforce any sanctions that they made. The main sanction used, was in the form of an economic sanction. Money and materials would be taken from the country being punished. The League may try to disarm the country, but with no armed forces themselves, this was not really an easy task. 'How successful was the League i the 1920's?' I think the answer to this is that the League was quite successful. Out of their aims they managed to achieve roughly half, and some others may have been partially achieved. The League did manage to stop wars, but they did not really achieve disarmament. They also managed to improve working conditions and health matters, but they did not manage to use sanctions effectively. The last two aims of the League were both equally achived as well, or as badly, as each other.Although neither of the two were achieved perfecty. Daniel Clark 10BH ...read more.