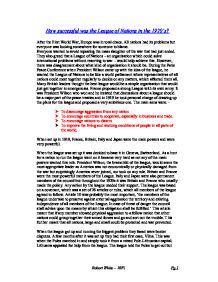 How successful was the League of Nations in the 1920's? After the First World War, Europe was in total chaos. All nations had its problems but everyone was looking somewhere for someone to blame. Everyone wanted to avoid repeating the mass slaughter of the war that had just ended. They also greed that a League of Nations - an organisation which could solve international problems without resorting to war - would help achieve this. However, there was disagreement about what kind of organisation it should be. During the Paris Peace Conference when President Wilson came up with the idea of the league, he wanted the League of Nations to be like a world parliament where representatives of all nations could meet together regularly to decide on any matters, which affected them all. Many British leaders thought the best league would be a simple organisation that would just get together in emergencies. France proposed a strong League with its own army. It was President Wilson who won and he insisted that discussions about a league should be a major part of the peace treaties and in 1919 he took personal charge of drawing up the plans for the league and proposed a very ambitious one. ...read more.

Because of this the league took a fairer view of this and gave the people of Upper Silesia a vote on whether they wanted to be part of a German or Polish nation. On general, the industrial areas voted for Germany and rural for Poland. The League split Upper Silesia in two, inserted safeguards and arrangements for power and water to be moved over the border were arranged. The League received more border disputes in other places such as; The Aaland Islands, Corfu, Bulgaria, The Ruhr, Yugoslavia and Memal. The outcome of the disputes were; Dispute/Place Outcome Vilna Failure Upper Silesia Success Yugoslavia Success Corfu Failure The Ruhr Failure Aaland Islands Success Bulgaria Success Memel Settlement Failure 4 of the disputes were successes and 4 of the disputes were failures by the league. If the league was a bit more 'forceful' and the members stuck to their agreement in article 10 then maybe more would be successes but then there could have been a lot more unnecessary blood-shed. If the league was not set-up then all of these border disputes could of turned nasty and more war triggered. So even 1 success was worth it and worth the league being there. ...read more.

Although during the border disputes, when the league only managed 4/8 successes, 1/8 would of still proven that the league was a success as that 1 dispute could of triggered off something big leading to more fighting. Although, one of the leagues aims was disarmament around the world, which was never achieved, it did work towards better communication between countries, which would not need the use of force. Although the league did not do much in the way of encouraging nations to cooperate, especially in business and trade, this meant that countries built their own economies back up, becoming much stronger in the late 1920s than before the war. Also there was a boom in world trade. Because the permanent members economies were in a devastated state at the end of the war they did not want to do much in the way of fighting other countries, it also wouldn't be very good for morale either. This lead to other countries trying to take places because they knew the permanent members would not do much in the way of force, i.e. Vilna. To me, the league was successful and in the 1920s it did a lot in the way of keeping peace and harmony around the world, even if not always achieved. Robert White - 10Fi Pg.1 ...read more.