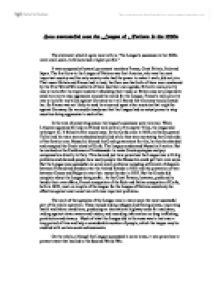 How successful was the League of Nations in the 1920s The statement which I agree most with is: &quot;the League's successes in the 1920s were small-scale, its failures had a higher profile.&quot;

How successful was the League of Nations in the 1920s The statement which I agree most with is: "the League's successes in the 1920s were small-scale, its failures had a higher profile." It was composed of several permanent members France, Great Britain, Italy and Japan. The first blow to the League of Nations was that America, who was the most important country and the only country who had the power to make it work, did not join. That meant Britain and France had to lead, the flaw was that both of them were weakened by the First World War and both of them had their own agenda. ...read more.

In the area of preserving peace, the league's successes were minimal. When Lithuania appealed for help as Poland took control of its capital Vilna, the league did nothing at all. It failed its first crucial case. In the Corfu crisis in 1923, an Italian general Tellini and his team were ambushed and killed while they were surveying the Greek side of the frontier area. Mussolini blamed the Greek government for this; he then bombarded and occupied the Greek island of Corfu. The League condemned Mussolini's action. But he worked on the Conference of Ambassador to make Greek apologise and pay compensation directly to Italy. This showed just how powerless the League was with big problems and showed people how easily people like Mussolini could get their own ways. ...read more.

So the League of Nations could only be effective against small countries with less important problems. The work of the agencies of the League was in many ways the most successful part of the whole operation. These include aiding refugees and freeing slaves, improving health and labour conditions, producing an international highway code for road users, raiding against slave owners and traders, and recording information on drug trafficking, prostitution and slavery. Much of what the League did in the areas was to last over a long period of time and help a considerable number of people, which the league may be credited with certain social achievements. On the whole, although the League succeeded in some areas, it was powerless to prevent event that had led to the Second World War. ...read more.