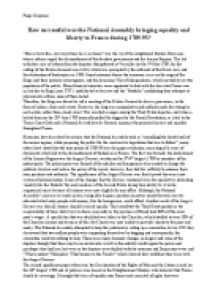 How successful was the National Assembly bringing equality and liberty to France during 1789-93?

﻿Paige Chapman How successful was the National Assembly bringing equality and liberty to France during 1789-93? ?Man is born free, yet everywhere he is in chains? was the cry of the enlightened thinker, Rousseau, whose reforms urged the dismantlement of the absolute government and the Ancien Regime. This led to further cries of reform from the deputies that gathered at Versailles on the 5th May 1789, for the calling of the Estates-General since 1614, which was prompted by the outbreak of the fiscal crisis and the declaration of bankruptcy in 1788. Some historians blame the economic crisis on the reign of the Kings and their princely extravagance, and the American War of Independence, which inevitably cost the popularity of the public. Many financial ministers were appointed to deal with the dire state France was in, but due to King Louis XVI?s inability to be decisive and the ?Notables? prohibiting their attempts at physiocratic reform, none of them lasted. Therefore, the King was forced to call a meeting of the Estates-General to discuss grievances, in the form of cahiers, from each estate. However, the king was manipulative and unfairly made the voting by each estate, rather than a head count. ...read more.

The King was then expected to abide by the new constitution and his name was changed from the ?King of France? to ?King of the French?, this meant that the subjects now became citizens and this thrilled many of the rural poor as they felt that justice and equality was finally happening. By September 1789, the government was facing large debts and many deputies were considering a radical change to the Church. Both of these factors caused the Nationalisation of the Church Land in November 1789. The National Assembly seized the land and sold it in the form of assignats which became a new currency in France. The assignats were worth a total of 400 million livres. The King disagreed with this proposal and he said that he would ?never consent to the spoliation of my clergy and nobility? but he would be unable to do anything as the army was no longer loyal towards him. Interestingly, 52% of the land was bought by peasants and a majority were first time land owners. With the income of the Church already halved due to tithes being abolished, privileges, like the clergy being able decide how much tax they pay and when they paid it, were then ...read more.

D.M.G Sutherland identifies that the “Civil Constitution of the Clergy [was] one of the great crises of the Revolution” and Jacques Solé believes the “clerical deputies had many grievances against the Church and drove the reform process for their own ends.” Therefore, the loss of the Church caused a popular revolution of the rural poor and sans culottes. They used violence to express their opinions and when the King ordered 30,000 of the army around Paris after the Tennis Court Oath, many civilians were outraged and started a citizen’s milita, which then led to the Storming of the Bastille on the 14th July 1789, which was the first attack using violence. This later led to other events like the Great Fear and the October Days. Later, the King fled Paris to Austria to try and gain his power back because he was a Prisoner of the Paris Mob; it angered many people who felt like he had attempted treason which caused King Louis XVI’s arrest and execution. Fuelled by this event, the discontent of living situations and false promises from the Legislative Assembly they took the Revolution into their own hands and started to sponsor beliefs like Robespierre’s Cult of the Supreme Being which would change the landscape of France forever. ...read more.