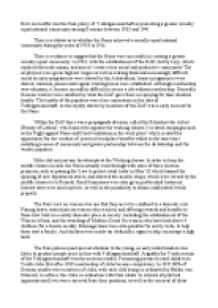 How successful was the Nazi policy of Volksgemeinschaft in promoting a greater socially equal national community among Germans between 1933 and 1941?

﻿How successful was the Nazi policy of Volksgemeinschaft in promoting a greater socially equal national community among Germans between 1933 and 1941 There is a debate as to whether the Nazis achieved a socially equal national community during the years of 1933 to 1941. There is evidence to suggest that the Nazis were successful in creating a greater socially equal community. In 1933, with the establishment of the DAF (led by Lay), which replaced the trade unions, and aimed 'create a true social and productive community' The employees were given high set wages as well as making dismissal increasingly difficult, social security programmes were started by the Arbeitsfront, leisure programmes were started, canteens, pauses and regular working times were established. Although membership was voluntary, it became incredibly difficult to secure a job without membership. Generally German workers were satisfied by what the DAF gave them in repaying for their absolute loyalty. The loyalty of the populace was a key cornerstone in the idea of Volksgemeinschaft, so the loyalty shown by members of the DAF was a early success for the Nazis. ...read more.

Arguably the Youth section of the Volksgemeinschaft was the most successful. Pressuring parents to send children to Youth clubs. But after 1939 membership of clubs became compulsory. In 1935 60% of German youth's were members of clubs, with each club being co-ordinated by Baldur von Schirach, to enforce the clubs co-ordination with Nazi ideals. In schools all political opponents and Jews were removed from their positions, as well as the removal of ideas from Jewish scientists. The National Socialist Teacher?s Alliance (NSLB) was set up to indoctrinate teachers, and many became party members during the later 30's. By 1939 the Hitler Youth has almost 8 million members, a successful part of the Nazi strive for Volksgemeinschaft. On the other hand, it can be said that the Nazis were not successful with their policy of Volksgemeinschaft. As many aspects which could be considered successful, did not achieve fully what the Nazis wanted, and only went some way to achieving their goal, before slowly returning to their previous state (Such as the decline in the membership of the HJ after 1939) ...read more.

The laws passed to help improve the situation for farmers are another example of short term gain and long term loss. The Reich Entailed Farm Law and the establishment of the Reich Food Estate, helped farmers for several years, until 1937 when the rising cost of labour, but the legally fixed food prices (both Nazi schemes) led to a decline in profits, and number of active farms similar to that of before the original laws designed to help farmers were introduced. The Nazi policies aimed at helping the middle classes, provided such a contradiction to what they wanted the working class to achieve, it caused a retraction in working class wealth. As the Nazis wanted to keep prices low and get more people into jobs, small businesses were out competed by large firms for what the laws forced in. In conclusion, I do not think the Nazi policy of Volksgemeinschaft was successful, during it's initial stages it was working well, but towards the later 30's the image of a socially equal national community was false, the image was created by diverting opinion against the groups the Nazis seemed unworthy, uniting people against minorities, but not uniting the nation together as one. ...read more.