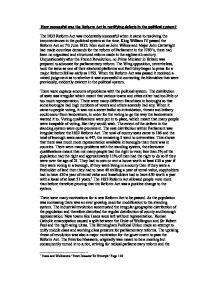 How successful was the Reform Act in rectifying defects in the political system?

How successful was the Reform Act in rectifying defects in the political system? The 1832 Reform Act was moderately successful when it came to resolving the inconveniences in the political system at the time. King William IV passed the Reform Act on 7th June 1832. Men such as John Wilkes and Major John Cartwright had made countless demands for the reform of Parliament in the 1760's, there had been no organized and structured reform made in the eighteenth century. Unquestionably after the French Revolution, no Prime Minister in Britain was prepared to advocate for parliamentary reform. The Whig opposition, nevertheless, took the issue as one of their electoral platforms and Earl Grey began to press for a major Reform Bill as early as 1793. When the Reform Act was passed it received a mixed judgement as to whether it was successful in correcting the blemishes that were previously, evidently existent in the political system. There were copious amounts of problems with the political system. The distribution of seats was irregular which meant that various towns and cities either had too little or too much representation. There were many different franchises in boroughs so that some boroughs had high numbers of voters and others scarcely had any. When it came to people voting, it was not a secret ballot so intimidation, threats and bribery could occur from landowners, in order for the voting to go the way the landowners wanted it to. Voting qualifications were put in to place, which meant that many people were incapable of voting, like they would wish. The extent of the defects in the standing system were quite prominent. ...read more.

It can be seen for all the statements and different people's opinions that the 1832 Reform Act made a reasonably positive change. The Reform Act was an optimistic change to many however; the working class were predominantly left out. Despite the fact that the working class helped to make sure that the Reform Act was passed, they still did not gain the vote. The Whigs made no attempt to deny that the �10 qualification was designed to exclude the working classes from the vote; the working class claimed that 'the Bill is a mere trick to strengthen the towering exclusiveness of our blessed constitution'.3 The working class were disappointed with the current Reform Act and this lead them to demand for a further reform act in the near future. Counties had the '40 shilling freeholder' and boroughs had six main types of franchise before the 1832 Reform Act was established, which were as the following; freemen, scot and lot, burgage, corporation, potwalloper and freeholder. The Reform Act formed a standardized franchise in the boroughs, consisting of owners and occupiers of property worth �10 in annual value. Franchise in the counties was specified to �10 copyholders and �50 leaseholders, although the long-standing voting rights of 40-shilling freeholders were upheld. The Reform Act did make some changes to the electorate no matter how people claim that it was rather insignificant. Prior to the act the electorate size in counties was 201,899 after the act the electorate rose to 370,379 overall an increase of 83%. Proceeding to the act the borough electorate was 164,391 however after the number amplified to 282,398 which was a total increase of 72%. ...read more.

After the 1832 Reform Act it was unmistakably noticeable that there were still some defects in the political system. There were still things that needed perfecting and the chartists demanded that the franchise should be widened so that more people could obtain the vote in a fair and uncorrupted way. The chartists demanded that there should be a universal suffrage for all men over the age of 21, equal sized electoral districts, voting via secret ballot should be established to make sure that the voting system was less corrupt, cease the property qualification for Parliament, introduce a wage for members of parliament and annual elections at parliament. In conclusion it seems quite evident that the 1832 Reform Act made a substantial change to the political system, some of this consequently was also a positive change, like the redistribution of seats and representation some of the changes however did not make a positive change to the system, like the secret ballot and the fact that the working class were left out predominantly, therefore leading people to complain about the act. The Act changed the redistribution of seats, for the positive. There were also some things that were left unchanged like the secret ballot and such. As to how far the Reform Act was successful in rectifying the defects in the political system, I think that it changed them more for the positive and made a good standing ground for the further acts to come. Overall in my opinion I believe that the 1832 Reform Act was most defiantly a step in the right direction and was a stepping stone to allow more acts to be passed in the future. The act allowed more people to get their point across and permit Britain to run much more smoothly. ...read more.