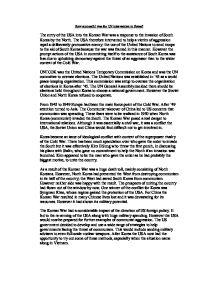 How successful was the UN intervention in Korea

How successful was the UN intervention in Korea? The entry of the USA into the Korean War was a response to the invasion of South Korea by the North. The USA therefore intervened to help a victim of aggression repel a deliberately provocative enemy: the use of the United Nations to send troops to the aid of South Korea because the war was framed in this manner. However the prompt actions of the USA in committing itself to the assistance of South Korea was less due to upholding democracy against the threat of an aggressor than to the wider context of the Cold War. UNTCOK was the United Nations Temporary Commission on Korea and was the UN committee to oversee elections. ...read more.

These fears were to be realized in 1950 when North Korea (communist) invaded the South. The Korean War posed a real danger to international relations. Although it was essentially a civil war, it was a conflict the USA, the Soviet Union and China would find difficult not to get involved in. Korea became an issue of ideological conflict with context of the superpower rivalry of the Cold War. There has been much speculation over who gave the order to invade the South but it was effectively Kim Il Sung who threw the first punch, in discussing his plans with Stalin, who gave no commitment to help the North if an invasion was launched. Kim appeared to be the man who gave the order as he had probably the biggest motive, to unite the country. ...read more.

However it had shown its military potential. The Korean War had a considerable impact of the direction of US foreign policy. It led to the re-arming of the USA along with huge military spending. However the USA would now be prepared for further examples of communist aggression. The US government decided to develop and use a wide range of strategies to help governments facing the threat of communism. This would include sending military advisers to even full-scale nuclear weapons. After Korea the USA now had the opportunity to try out some of these methods, especially when the situation came along in Vietnam. The UN had demonstrated the ability to exert its authority against acts of aggression but it had been, as Soviet Propaganda had pointed out, a tool of US policy. Respect for the UN among the developing nations of the Third World declined after the war. ?? ?? ?? ?? ...read more.