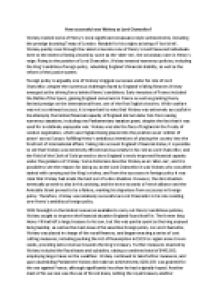 How successful was Wolsey as Lord Chancellor?

﻿How successful was Wolsey as Lord Chancellor? Wolsey marked some of Henry?s most significant renaissance style achievements, including the prestige boosting Treaty of London. Notable for his origins as being of ?low birth?, Wolsey quickly rose through the ranks to become one of Henry?s most favoured individuals- even to the extent of being viewed by some as the ?alter-rex?, the secondary ruler in Henry?s reign. Rising to the position of Lord Chancellor, Wolsey enacted numerous policies, including the King?s ambitious foreign policy, rebuilding England?s financial stability, as well as the reform of the justice system. Foreign policy is arguably one of Wolsey?s biggest successes under his role of Lord Chancellor; despite the numerous challenges faced by England?s failing finances Wolsey emerged as the driving force behind Henry?s ambitions. Early invasions of France included the Battle of the Spurs, gaining England some land in France as well as granting Henry limited prestige on the international front, one of the first English victories. While warfare was not a continued success, it is important to note that Wolsey was extremely successful in his attempts; the limited financial ...read more.

As Lord Chancellor, Wolsey was placed in charge of the royal finances, and began enacting a series of cost cutting measures, including pushing the Act of Resumption in 1515 to regain some Crown Lands, providing extra revenue towards the king’s treasury. Further measures enacted by Wolsey included the Royal taxes and subsidies, raising a combined total of £443,000, employing larger taxes on the wealthier. Wolsey continued to take further measures, and upon assembling Parliament Wolsey did make an achievement; £200,000 was granted for the war against France, although significantly less than he had originally hoped. Another mark of his success was the use of forced loans, netting the royal treasury another £350,000, rebuilding much of the treasury that had been spent. Measures to cut spending were also enacted, including the expulsion of the minions, the reduction of the Gentleman of the Bedchamber as well as laying off 2000 royal servants proved to be a successful cost-cutting measure. While Wolsey’s success was hampered by the failures of the Amicable Grant which failed to provide any monetary support, overall Wolsey was extremely successful in managing royal finances, ...read more.

However, his successes are hampered by the fact that Wolsey was somewhat unjust in using the courts to pursue his own personal interests, as well as the ultimate failure to secure any permanent reforms that would last even after his fall from power. Wolsey?s role as Lord Chancellor resulted in him being placed into numerous positions of responsibility, much so to the point that some historians refer to him as the ?alter rex? of England, the real manager behind the scenes. Clearly Wolsey was relatively successful in his role, successfully negotiating foreign peace treaties and achieving a new level of prestige for England never seen before. Royal finances were also improved significantly, especially when taking into account that Henry?s numerous excursions in war were extremely expensive, and yet Wolsey was still able to maintain financial relative stability. While the justice system saw little permanent reform, it must be noted that Wolsey did make some steps towards greater justice, although hampered by his own personal vengeance. Despite this, Wolsey had been successful in the key issues of the time, and overall he was successful in his role as Lord Chancellor to a large extent. ...read more.