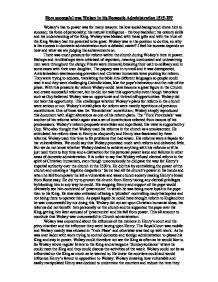 How successful was Wolsey in his Domestic Administration 1515-29?

How successful was Wolsey in his Domestic Administration 1515-29? Wolsey's rise to power was for many reasons: his low social background drove him to succeed; his force of personality; his natural intelligence - the boy bachelor; his oratory skills and his understanding of the King. Wolsey was blessed with these gifts and with the trust of the King Wolsey had the potential to be great. Wolsey was in the position to do this, so why is his success in domestic administration such a debated matter? I feel his success depends on how and what we are judging his achievements on. There was much pressure for reform within the church during Wolsey's time in power. Bishops and Archbishops were criticised of nepotism, meaning uneducated and undeserving men were throughout the clergy. Priests were immoral, breaking their oath to celibacy and in some cases with their own daughter. The papacy was in turmoil and it was disrespected. Anticlericalism was becoming prevalent and Christian humanists were pushing for reform. They were trying to educate, translating the bible into different languages so people could read it and they were challenging Catholic ideas, like the pope's behaviour and the role of the priest. With this pressure for reform Wolsey could have become a great figure in the Church and create successful reformer, but he did not take this opportunity even though historians such as Guy believed Wolsey was an opportunist and thrived off opportunities. ...read more.

The courtiers were soon back in Henry's court and Wolsey proposed that the courtiers should be used as ambassadors for England going off to France and other countries on diplomatic missions. This again removed them from the court for periods of time and Wolsey had the trust of the King. Wolsey needed money for Henry's attack on France but there was no money, so he created the amicable grant to gain money. But this backfired and Wolsey was vulnerable, so Wolsey through up another smokescreen of reform. The Eltham ordinances in 1526 reduced the amount of courtiers in the privy chamber from 12 - 6 and he could replace his rivals in the chamber. He removed the current 'groom of the stool' - William Compton and put in the politically neutral Henry Norris. This was done in the name of economy and ultimately covered up the failure of the amicable grant with his smokescreen of reform. His reforms were for personal interest and hardly ever benefited England. Wolsey's administration of Government was actually quite successful, he kept considerable control over the courtiers and although the reforms were not beneficial to the country they were a success for him personally as he stayed in power longer and still had the trust of Henry and the influence over Henry. ...read more.

Although he failed to reform enclosures as he struggled to focus on his campaign due to more important pressure from other areas in domestic administration. Many of Wolsey's reforms were geared towards personal interest and not towards gain for England. Wolsey is self glorifying and was interested in taking care of himself; he wanted to stay in power as long as he could and he undermined people and used false reforms to stay there. On the other hand Wolsey has been treated harshly by history as he was only trying to stay in power and he did. I feel Wolsey, as chief minister to Henry VIII had a hard job, he had to put up with a warlike and very lavish King and as Cardinal and papal legate in a failing and challenged Religion did well to stay in power so long, and I feel this was his main aim. He did not achieve much in domestic administration and did not improve England as a country during his time in power, but he did stay in power for twenty years, which is a very long time. Wolsey may not have judged his success on how much he achieved but on how long he could stay at the top. Wolsey proposed much and delivered little, but was he concerned about this? Stephen Kyle a ...read more.

The author has considerable knowledge of Wolsey's reforms and uses a good amount of detail throughout. Paragraphs could start with clearer judgments to maintain the analytical focus and direct quotations could be used, although historians are referred to well. 4 out of 5 stars.