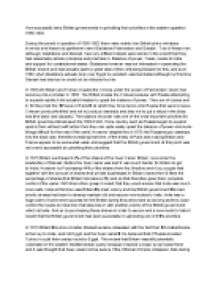 How successful were British governments in upholding their priorities in the eastern question 1856-1902 During the period in question of 1856-1902 there were mainly two British prime ministers involved and these two gentlemen were Gladstone,Palmerston and Disraeli.  Two of these men although, Gladstone and Disraeli  had very different ideals were similar in the extent that they had reasonably similar principles and priorities in, Balance of power, Trade, routes to India and support for constitutional states. Gladstone however was not interested in expanding the British empire and had actually spent a great deal of time criticising Disraeli for this, and so in 1882 when Gladstone actually took over Egypt by accident was humiliated although by this time Disraeli had died so he could not be ridiculed by him. In 1855-56 Britain and France invaded the Crimea under the power of Palmerston whom had become prime minister in 1855. The British invade the Crimea because with Russia attempting to expand rapidly it did actually threaten to upset the balance of power. They are of course and in 56 they hold the �Peace of Paris� at which they force terms onto Russia that were to leave Crimean ports unfortified and not to produce warships and also not to put a ships in the black sea (the black sea clauses). The balance of power was one of the most important priorities for British governments between the 1856-1902. ...read more.

Also during this time The balance of power in Europe was moving because of the Emergence of Germany as a new country in 1871. During this time Russia continued to itch to expand further and so finally 1877 they could wait no longer and so began the Russo-Turkish war. It was the official statement that Russia went to war because �it wished to protect the Christians of the Balkan area of the empire� however realistically it was probably more to do with the fact that it was looking to exploit the collapse of the Ottoman Empire and By January 1878 Russia had lost 200,000 men. But they kept on going and eventually they came close enough to Constantinople for Disraeli to finally act by sending a fleet of iron clad warships to the straits. The Russians who were by this point exhausted and their army was diseased stopped a few miles outside of San Stefano and agreed to make peace.  The Balkan crisis mainly plays on the fact of the balance of power and the routes to India which then inevitably ties in with trade. And so by Disraeli stepping in when he did it means that Russia was unable to take Constantinople which he said was �the key to India� and so preserved the routes to India which in turn saved trade. And by stopping Russia and sending them back it means that the balance of power was once again restored. ...read more.

balance of power.A British force of about 40,000 fighting men, mostly British and Indians, was distributed into military columns which penetrated Afghanistan at three different points. An alarmed Sher Ali attempted to appeal in person to the Russian Tsar for assistance, but unable to do so, he returned to Mazari Sharif, where he died on 21 February 1879. The fact that Britain was convincingly beaten in this war did not matter so much in the end. Because it showed the Russians how hard it would be to effectively invade Afghanistan beat them and take control of the country and then go on to invade India and crush both the British and Indian forces there. Therefore the British government did once more simply by sticking to it�s priorities manage to once again successfully uphold them. For they managed to also keep the routes to India safe. So in conclusion I believe that it is very obvious that although different prime ministers  and different governments have all been thrown very different challenges they have all responded to them in a resolute way and have only once from the matters that I have examined in this essay strayed fro upholding their priorities and that was when the black sea clauses were broken and Britain chose to turn a blind eye. However asides from this is it is cleat that throughout the period 1856-1902 the British Government�s were extremely successful in upholding their priorities in the Eastern Question. ...read more.