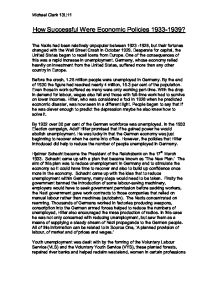 How Successful Were Economic Policies 1933-1939? The Nazis had been relatively unpopular between 1923 -1928, but their fortunes changed with the Wall Street Crash in October 1929. Desperate for capital, the United States began to recall loans from Europe. One of the consequences of this was a rapid increase in unemployment. Germany, whose economy relied heavily on investment from the United States, suffered more than any other country in Europe. Before the crash, 1.25 million people were unemployed in Germany. By the end of 1930 the figure had reached nearly 4 million, 15.3 per cent of the population. Even those in work suffered as many were only working part-time. With the drop in demand for labour, wages also fell and those with full-time work had to survive on lower incomes. Hitler, who was considered a fool in 1928 when he predicted economic disaster, was now seen in a different light. People began to say that if he was clever enough to predict the depression maybe he also knew how to solve it. By 1932 over 30 per cent of the German workforce was unemployed. In the 1933 Election campaign, Adolf Hitler promised that if he gained power he would abolish unemployment. ...read more.

Under this measure all men aged between the ages of nineteen and twenty-five had work for the government for six months. Later women were also included in the scheme and they did work such as teaching and domestic service. Jewish businesses were confiscated and given to non Jews, whilst all Jews were forced to leave work, source one states that, 'It was further necessary to remove the conditions giving rise to interference.' Schacht also decided to introduce what came to be known as Mefo Bills, Mefo Bills were an alternative form of payment where the employee would take the bill to the bank and get it cashed in. The government also introduced plans of freezing all taxes and wages. They also took over shares and lowered interest rates to save people money. This is referred to in source one, 'Put a stop to the everlasting fluctuations of wages and prices.' However whilst the figures may have looked good the reality was quite different. All Jews and women were not included on the unemployment list. So in reality there were still many people unemployed but they were not thought as of important so were not included. ...read more.

Goering also reinforced the guns and butter debate, therefore there was an enormous shortage of raw materials, an increasing state intervention and a more lasting recovery was prevented due to the fact that imports were lowered and exports were also lowered. Therefore less money was coming into Germany. This is referred to in source two, 'Shortages of goods restrict their turnover.' * In conclusion, I feel that that both plans ended up being a huge failure. We just have to look at the facts to find out why. By 1939, Germany was importing 33% of its required raw materials, * Government income had been 10 billion Reichsmarks in 1928. In 1939, it was 15 billion. However, government spending had increased from 12 billion Reichsmarks in 1928 to over 30 billion in 1939. * 1933 to 1939, the Nazi government always spent more than it earned so that by 1939, government debt stood at over 40 billion Reichsmarks. * Annual food consumption in 1937 had fallen for wheat bread, meat, bacon, milk, eggs, fish vegetables, sugar, tropical fruit and beer compared to the 1927 figures. The only increase was in rye bread, cheese and potatoes. * Real earnings in 1938 were all but the same as the 1928 figure. (Real earnings are wages adjusted to allow for inflation). ?? ?? ?? ?? Michael Clark 13LH1 ...read more.