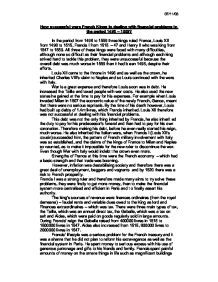 How successful were French Kings in dealing with financial problems in the period 1498 - 1559?

How successful were French Kings in dealing with financial problems in the period 1498 - 1559? In the period from 1498 to 1559 three kings ruled France, Louis XII from 1498 to 1515, Francis I from 1515 - 47 and Henry II who was king from 1547 to 1559. All three of these kings were faced with many difficulties, although none so difficult as their financial problems and although each king strived hard to tackle this problem, they were unsuccessful because the overall debt was much worse in 1559 than it had been 1498, despite their efforts. Louis XII came to the throne in 1498 and as well as the crown, he inherited Charles VIII's claim to Naples and so Louis continued with the wars with Italy. War is a great expense and therefore Louis soon was in debt. He increased the Taille and taxed people with war costs. He also used the new states he gained at the time to pay for his expenses. For example when Louis invaded Milan in 1507 the economic value of the newly French, Genoa, meant that there were no serious reprisals. By the time of his death however, Louis had built up debts of 1.4m livres, which Francis inherited. Louis XII therefore was not successful at dealing with his financial problems. ...read more.

and clothes (being a young king, he felt he had to be a "fashion icon"). Francis was increasingly short of cash; so to raise money he had to use expedients because the tax he collected simply was not enough, as it said previously. So, he resorted to selling offices, land and even titles, which angered the older aristocracy and this was the beginning of the future "two-tier" nobility. He also introduced "1 off taxes" and "1 off loans" and encouraged benevolences, which were "gifts" to the king for his good will and benevolence. Francis sold off 20 councillorships of the Parlement de Paris and called in annual taxes early (the Taille) in 1522. He had 2.6 million livres of expenses put onto the 1523 budget and demanded that towns paid for infantry. The clergy had to pay 1.2 million livres to Francis and he took control of the churches - melting down some treasures to make coins. He also raised loans from the Parisian people (called "rentes") in 1526, 1537 and 1543. He collected 200000 livres from them and this contribution meant that Francis promised to make annual payments to the Parisian people for life. Francis could not tamper greatly with taxes, which was why expedients were used to such excess. In 1542 he tried to tamper with the Gabelle in Guyenne - an area of salt marshes and the people rebelled. ...read more.

However, like his predecessors, he did not solve his financial problems very successfully. None of the three kings in this period debased the coin - which could have been a valuable source of income. Nor did they introduce new, or more taxes to any great extent and they did not encourage trade or industry, which could have also be a great help to their financial burdens and the inefficiency and corruption of the tax collection system was never really resolved properly. The main reason they were so indebted were the wars with Italy and Henry, before he died, signed the Treaty of Cateau-Cambr�sis in 1559 which eventually stopped the fighting. This treaty was made far too late however because Henry, at the time of his death in 1559 owed 12 million livres. His death destroyed all confidence in the financial system and it collapsed in late 1559. In conclusion, these three kings, as has been said, all inherited debt then added to it due to their extravagant lifestyles of war, diplomacy and flamboyance. The tax system was inefficient, corrupt and never rectified. Their attempts at reforms were weak; the kings were not able to efficiently exploit the tax system and their expedients could not bring in the income they needed. Therefore, it can most definitely said, with debts soaring to 12 million livres from only 1.4 million at the start of Francis' reign, that the French kings were very unsuccessful in dealing with financial problems in this period, although they did try. 07/11/03 ...read more.