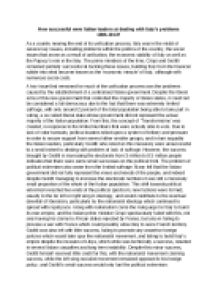 How successful were Italian leaders at dealing with Italys problems 1896-1914?

﻿How successful were Italian leaders at dealing with Italy?s problems 1896-1914? As a country nearing the end of its unification process, Italy was in the midst of several key issues, including problems within the politics of the country, the social issues that arose as a result of unification, the economic stability of Italy as well as the Papacy?s role in the Italy. The prime ministers of the time, Crispi and Giolitti remained partially successful at tackling these issues, building Italy from the financial rubble into what became known as the ?economic miracle? of Italy, although with numerous social costs. A key issue that remained for much of the unification process was the problems caused by the establishment of a centralised Italian government. Despite the liberal aims of this new government that controlled the majority of Italian states, it could not be considered a full democracy due to the fact that there was extremely limited suffrage, with only around 2 percent of the total population being able to take part in voting, a so called liberal state whose government did not represent the actual majority of the Italian population. From this, the concept of ?Transformismo? was created, in response to the limited numbers that were actually able to vote. ...read more.

Social reforms made by Giolitti also led to the abolishment of child labour, with a pensions scheme for the old age and sick extended as well as the establishment of better working conditions by a compulsory weekly rest day. Similarly, under his new legislation female workers were also granted a maternity fund, in an attempt to pacify and improve working as well as living conditions for the working class majority in the south. Overall, it is clear that the Italian leaders of the time generally succeeded in improving Italy?s general society, especially Giolitti?s reforms, although hampered by Crispi?s unpopular domestic policy. Prior to the unification process, as a set of separate sovereign states success economically was hardly viable, and the unification process of the states did little to actually implant the idea of a single Italian nation within the majority of the Italian mind-set, and with a combination of economically crumbling states. To ease this issue, industrialisation was thoroughly encouraged as a way of building the ?economic miracle?, and this would be a major success as Italy began to catch up to other European countries economically. In this way the Italian leaders can be seen as extremely successful at tackling the issues of the Italian economy, with the rapid industrialisation process leading to production of commodities such as cars and typewriters in Italy. ...read more.

up would trigger an even bigger outburst, and therefore the Italian leaders of 1896-1914 generally failed at maintaining a stable relationship with the Papacy, as despite Catholics being involved in the political system, generally there was still tension emanating from both sides. The Italian leaders of 1896-1914 Crispi and Giolitti attempted numerous reforms to repair the problems of the newly unified state; the newly united Italy was economically backwards, living conditions relatively poor compared to other European countries and the democratic system a failure, failing to grant the majority of the population the vote. The leaders were only successful to a limited extent as despite the suffrage being enlarged, politically the idea Transformismo was still very much engrained and the failure to keep a stable relationship with the Church influenced voting. A success of the two leaders was in industrialising the country, increasing the standard of living and boosting the Italian economy, although this can only be considered a minor achievement due to the fact that not all of Italy benefitted; the rural southern states remained relatively poor and backwards, failing to keep up with the growing northern states. Overall, the leaders were successful to a limited extent to dealing with the problems of Italy, their successes often with shortcomings that would later strike Italy again. ...read more.