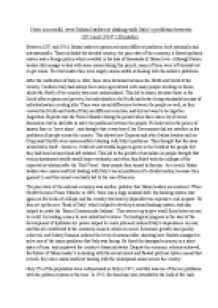 How successful were Italian leaders at dealing with Italys problems between 1871 and 1914?

﻿How successful were Italian leaders at dealing with Italy?s problems between 1871 and 1914? (30 marks) Between 1871 and 1914, Italian leaders experienced many different problems, both nationally and internationally. These included the divided country, the poor state of the economy, a flawed political system and a foreign policy which resulted in the loss of thousands of Italian lives. Although Italian leaders did manage to deal with some issues during this period, many of them were left unresolved or got worse. For that reason they were largely unsuccessful at dealing with the nation?s problems. After the unification of Italy in 1861, there were divisions between the North and South of the country. Southern Italy had always been more agricultural with many people working on farms, whilst the North of the country was more industrialised. This led to issues, because those in the South often experienced poverty, but individuals in the North had better living standards because of industrialisation creating jobs. ...read more.

This was set up to give small firms better access to credit, by lending money to new industrial ventures. Technological progress in the way of the development of hydroelectric power helped to create jobs and reduced Italy?s dependence on coal, and this all contributed to the economic miracle which occurred. Economic growth was quickly achieved, and Sidney Sonnino reduced the level of national debt, showing how Giolitti managed to solve one of the major problems that Italy was facing. He fixed the damaged economy in a short space of time, and improved the country?s financial status. Despite the economic reforms achieved, the failure of Italian leader?s in dealing with the social unrest and flawed political system meant that overall, they were unsuccessful at dealing with the widespread issues across the country. Only 2% of the population were enfranchised in Italy in 1871, and this was one of the key problems with the political system at the time. ...read more.

They managed to invade Libya in 1912, but were resisted fiercely by the nationals, and before they could assert their full control, one eight of the population had been killed in intense fighting with the Italian army. Despite the fact that Italy did expand its colonial empire, it remained relatively small compared to other nations empire; this was initially viewed as a problem by Italy?s leaders, but they were unsuccessful at attempting to solve it. By poorly thinking through their military strategies, they failed in their efforts to conquer other countries and did not expand. In conclusion, Italian leaders were largely unsuccessful at solving problems that the country and its people experienced between 1871 and 1914. Although they did manage to significantly improve the state of the economy, the North/South divide widened, the political system remained corrupt and Italy?s foreign policy failed. This highlights how the majority of issues were not solved, showing how the three main leaders of Depretis, Crispi and Giolitti fell short in trying to improve the Italian Kingdom. ...read more.