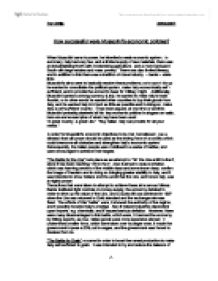 How successful were Mussolini's economic policies?

How successful were Mussolini's economic policies? When Mussolini came to power, he inherited a weak economic system. In summary, Italy had very few, and a limited supply of raw materials, there was an industrialising North with modernising agriculture, and a more backward South with large estates and mass poverty. There was also limited literacy, and in addition to this there was a tradition of close industry - banks - state links. Mussolini's aims were to basically resolve these problems, so to sum this up he wanted to consolidate the political system, make Italy economically self-sufficient, and to provide the economic base for military might. Additionally, Mussolini wanted a strong currency (Lira), he wanted to make Italy's trade flourish, or in other words he wanted other countries to buy their goods from Italy, and he wanted Italy to import as little as possible and in doing so, make Italy a self-sufficient country. It has been argued, at one time or another, Mussolini probably plastered all his key economic policies in slogans on walls, here are some examples of what may have been used. "A great country, a great Lira." "Buy Italian. Italy can provide for all your needs." In order for Mussolini's economic objectives to be met, he believed, (as a dictator) that will power should be used as the driving force of a society which could overcome all obstacles and strengthen Italy's economic system. Subsequently, the Italian people were mobilised in a series of battles, and were encouraged to achieve their targets. ...read more.

The way in which these actions positively affected Italy, were, it created many jobs and improved public health conditions greatly, new towns were shaped which were called "Latina" and "Sabaudia" and they were set out as showpieces. Also, the Pontine Marshes near Rome were fully drained. However, as seen in the other battles, there were some negative effects. These were, that between 1928 and 1938 only 80,000 hectares of land were reclaimed, which was in fact only 1/20 of the propaganda claim of 1/6 of the land of Italy. The land that was reclaimed was mainly in the North, and therefore the South of Italy was neglected, and ambitious plans were blocked by southern landowners. The government also intervened in other key areas of the economy, namely these were Agriculture, Industry, Transport, Trade, and Taxation. Government intervention in agriculture was considerable, but apart from a shift to wheat production, Fascist policies failed to tackle basic problems like poverty and the backwardness of Southern agriculture. Fascism idealised the countryside as the source of the clean, virtuous life of peasantry. Mussolini's ruralisation campaign was intended to reverse the drift to the cities by restricting migration and investing funds to help establish a prosperous land owning peasantry, nevertheless life remained hard and the flight from the countryside continued. As mentioned earlier the government tried to help agriculture prosper, by emplacing tariffs on imported grain, giving grants to farmers for fertilisers and machinery, and also they make an effort to spread scientific knowledge. ...read more.

who had to approve representatives of workers and employers. As with any system there are strengths and weaknesses, and this was no exception, the two key weaknesses of this system were, that representation within corporations was unbalanced, meaning that employers represented themselves whereas the workers were represented by Fascist party members. The second key weakness is that the corporations simply discussed issues, while Mussolini got the final say and made the real decisions. Mussolini claimed that the "Third Way" was a new synthesis, and that the corporative state would reconcile conflicting interests, and in addition to this it would unite all the people to produce for the nation. However really, what was going on was the exploitation of workers, a vast bureaucracy was created, often duplicating government agencies, and finally there was a grave burden on the economy. So in conclusion Mussolini's economic polices did not do an awful lot for Italy, however it must be noted that Mussolini created many jobs through public works schemes, and through battles such as the "Battle of the Marshes," and he made Italy self-sufficient in some areas such as Wheat production, and in addition to this he made slight progresses in transport, in that he had motorways built and 5000 kilometres of railway were electrified. However on the whole many of his policies failed and Italy never really made any dramatic progress with the economy, the corporative state exploited workers and they had no way or opportunity of representing themselves, so in that respect the systems that Mussolini introduced were unfair. Tom Willis 30/04/2007 -1- ...read more.