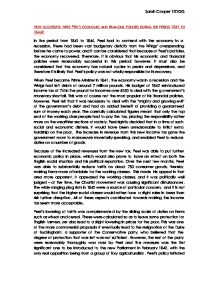 How successful were Peel's economic and financial policies in the period 1841-46?

HOW SUCCESSFUL WERE PEEL'S ECONOMIC AND FINANCIAL POLICIES DURING THE PERIOD 1841 TO 1846? In the period from 1841 to 1846, Peel had to contend with the economy in a recession. There had been vast budgetary deficits from the Whigs' overspending before he came to power, and it can be considered that because of Peel's policies, the economy recovered. Therefore, it is obvious that his economic and financial policies were reasonably successful in this period; however, it must also be considered that the economy has natural cycles to peaks and depressions, and therefore it is likely that Peel's policy was not wholly responsible for its recovery. When Peel became Prime Minister in 1841, the economy was in a recession and the Whigs had left debts of around 7 million pounds. His budget of 1842 reintroduced income tax at 7d in the pound for incomes over �150 to deal with the government's monetary shortfall. This was of course not the most popular of his financial policies, however, Peel felt that it was necessary to deal with the "mighty and growing evil" of the government's debt and had an added benefit of providing a guaranteed sum of money each year. ...read more.

These were calculated so as to leave some protection for English farmers, yet also lead to a slight lowering in prices for the poor. This was one of the more controversial proposals-it eventually lead to the resignation of the Duke of Buckingham, a supporter of the Conservative party, who believed that the degree of protection that was left was not sufficient. However, the rest of the party were reasonably thoroughly won over by Peel and the measure was the first significant one to be introduced to the new Parliament in February 1842, with the only real opposition being from a group of Tory agriculturalists. Peel's policy initiated a moderate programme of free trade, which, as far as he was concerned, was the way forward for England. It can be seen as a continuation of the liberalisation of trade policies developed by Robinson and Huskisson in the 1820s, although with a more determined approach. Peel's 1842 Budget also bore remarkable similarities to Baring's budget of 1841, which Peel tore apart in the House of Commons. ...read more.

Peel very much believed that in order to deal with the 'social question', the government's responsibility was to create economic conditions which would encourage growth and employment, and as such his social policies were very narrow. He believed that any further intervention would be counter-productive, and as such mainly supported previous initiatives, for example the Whigs' 1834 Poor Law Amendment Act. Overall, the evidence suggests that although Peel's policies were very successful, they can be considered more of a stimulus rather than primary cause of the improvement in the economy. Although he was able to bring the country out of recession quickly, it is in the natural cycle of the economy to have peaks and troughs, and these do not necessarily due to government policy. Peel's free trade principles placed Britain at the centre of the developed world at the time, and Britain enjoyed considerable prosperity, but long-term this market did not work and Britain had to reintroduce protection. Therefore, we can consider that in the short-term, his policies were reasonably successful, but they had unforeseen long-term effects which, with benefit of hindsight, make them seem less positive. ?? ?? ?? ?? Sarah Cooper 12DGG ...read more.