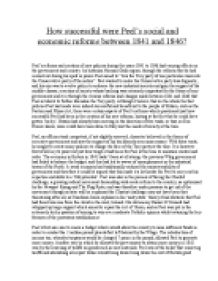 How successful were Peels social and economic reforms between 1841 and 1846?

﻿How successful were Peel?s social and economic reforms between 1841 and 1846? Peel?s reforms and creation of new policies during the years 1841 to 1846 had varying effects on the government and country. As historian Norman Gash argues, through the reforms that he had carried out during his spell in power Peel aimed to ?turn the Tory party of one particular class into the Conservative party of the nation?. Peel wanted to make the Conservative party less dogmatic, and his aim was to evolve policy to embrace the new industrial society and gain the support of the middle-classes, a section of society whose backing was extremely important for the future of any government and it is through the various reforms and changes made between 1841 and 1846 that Peel set about to further liberalise the Tory party. Although I believe that on the whole the that policies Peel had made were indeed successful and beneficial to the people of Britain, such as the Factory and Mines Act, there were certain aspects of Peel?s reforms which questioned just how successful Peel had been in the creation of his new reforms, hinting at the fact that he could have gotten ?lucky?- Britain had already been moving in the direction of free trade, or that, as Eric Evans claims, more could have been done to fully suit the needs of society at the time. Peel, an efficient and competent, if not slightly reserved, character believed in the theory of executive government and saw the support of his backbenchers as unnecessary. With these traits, he sought to create many policies to change the face of the Tory party at the time. ...read more.

What is also important to mention here is that the spirit of the times limited his room for manoeuvre, and Peel had an ideology that encouraged self-reliance and not self-dependence, which is displayed in his renewal of the Poor Law in 1842. Peel?s job was to create the conditions, and not interfere with people?s lives and ?spoon feed? them. He therefore did what he had to do in terms of social policy and placed his faith in the power of the market and his economic reforms to further strengthen social conditions and create prosperity of wealth in England- something which is often misunderstood when interpreting Peel?s political philosophies. The fact that there was a massive outflow of grief upon his death shows the impacts of social policy Peel had created- although not ?massive?, something like this and never really been undertaken before- to do what Peel had done in those times was fairly remarkable. Steadman Jones reinforces this view- that Peel and his government did not project the typical ?nasty state? that past governments had made a name for themselves for, but instead offered a variety of policies which showed that the government really did care. The way in which Peel dealt with Ireland is also telling of how successful his policies had been. Daniel O?Connell posed a direct challenge to Peel by setting up the Repeal Association, aiming to repeal the Act of Union of 1800. Peel had been put in a tough position; he had to quash the Irish nationalist rebellion but at the same time had to win over the general opinion of the Irish people, especially that of the Catholics. ...read more.

Peel had been determined to change the face of the Conservative party by introducing more liberal measures, such as the Factory and Mines Act, and although they didn?t go the ?full way? in totally improving social conditions, they were the first ?groundbreaking? types of reforms that had been seen before. By ignoring the majority of his cabinet and trying his best to break away from the protectionism that pervaded the Tory party, his economic reforms not only provided the government with more money, turning the past deficit into a surplus, but also helped reduced unemployment and increase trade through the lowering of tariffs and income tax. His decision to go against his protectionist, ?old-value? cabinet was also very wise, although one could argue that he greatly mismanaged his party through passing acts that had little backing, perhaps it was necessary for Pitt to take full control in order to ?break free? from protectionism and implement the new face of the Tory party that he had been trying to generate. Peel focused on continuity. He placed an emphasis on acts lasting, as evidenced by the banking framework changes, and managed to lay down the solid foundations for the future. In the eyes of the working class, he had at least ?done something- in the mood of the public times he seemed to have managed to connect with the public, and had had an ?overall vision? that sought to improve Britain socially and economically. In the end, perhaps it is the fact that monuments struck, bells rang, and statues had been built in the honour of Peel?s death, which epitomises the successes he had during his tenure. Thomas Smith ...read more.