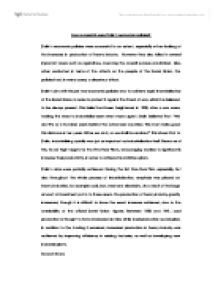 How successful were Stalin's economic policies?

How successful were Stalin's economic policies? Stalin's economic policies were successful to an extent, especially when looking at the increases in production of heavy industry. However they also failed in several important areas such as agriculture, meaning the overall success was limited. Also, when evaluated in terms of the effects on the people of the Soviet Union, the policies had, in many cases, a disastrous effect. Stalin's aim with his pre-war economic policies was to achieve rapid industrialisation of the Soviet Union, in order to protect it against the threat of war, which he believed to be always present. This belief had been heightened in 1928, after a war scare, making the need to industrialise seem even more urgent. Stalin believed that: "We are fifty or a hundred years behind the advanced countries. We must make good this distance in ten years. Either we do it, or we shall be crushed." This shows that to Stalin, industrialising quickly was just as important as industrialisation itself. Because of this, he set high targets for the Five-Year Plans, encouraging workers to significantly increase their productivity, in order to achieve his ambitious plans. ...read more.

There was also an enormous human cost. An estimated fifteen million Kulaks, though some Historians place the figure even higher, were eliminated through Stalin's process of dekulakisation, which aimed to get rid of those 'rich' peasants thought to have benefited from the NEP. In addition to this a further four million peasants were estimated to have died after a famine in 1933 in the Ukraine, an event which was firmly denied by the Soviet government. They have since been accused of deliberately ignoring the famine in order Agricultural output did begin to recover in the late 1930s, due to the more widespread use of agricultural machinery but productivity remained low and agricultural targets consistently failed to be met. It took decades for Soviet agriculture to meet its pre-collectivisation production figures. The threat of war once again meant that arms production took priority and the development of agricultural machinery became less important, contributing to the continued low achievements of collectivisation. The labour and living conditions of the citizens of the Soviet Union were also affected by Stalin's economic policies. For those that worked hard and showed a commitment to the plans by consistently achieving their targets, they were rewarded with higher wages and improved living conditions, for example larger apartments. ...read more.

Overall, Stalin's economic policies had limited success. Industrial output increased and by the time of the Second World War, the Soviet Union had been transformed from a backward agricultural country to a modern industrial nation, on its way to becoming a leading economic power. However, Stalin believed in achieving these results whatever the cost and this meant that the policies failed to take in to account the Soviet citizens who experienced a decline in their living and working conditions. When looking at the direct results of Stalin's policies the biggest failure was the agricultural decline and the resulting famine. Despite the policy of collectivisation, agricultural output simply could not keep up with industrial output and without food to feed the workers, the policies of Stalin in regards to industrialisation would always be limited in what they could achieve. In addition to this, the long term result of the purges and the thousands of deaths they caused, can be seen as one of the most disastrous consequences of Stalin's economic policies and, in my opinion, cannot be justified no matter what the improvements made by industry. ?? ?? ?? ?? Hannah Evans ...read more.