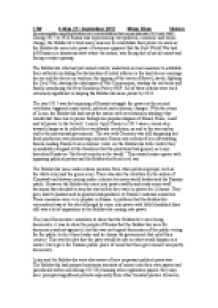 How successful were the Bolsheviks in consolidating their power between 1917 and 1924?

﻿C/W Friday 21st September 2012 Miran Khan History How successful were the Bolsheviks in consolidating their power between 1917 and 1924? During 1917 to 1924 Russia was experiencing vast political, economic and social change, the Bolshevik?s took many meaures to consolidate their power.As soon as the Bolsheviks came into power it beacame apparent that the First World War had left Russia in a disastrous state where the nation, was facing alot of social unrest and facing a major uprising. The Bolsheviks who had just seized control, undertook several measures to establish their authority including the declaration of initial reforms ie the land decree marriage decree and the decree on workers, the signing of the treaty of Brest-Litovsk, fighting the Civil War, starting the ideologies of War Communism, starting the red terror and finally introducing the New Economic Policy NEP. All of these actions were each extremely significant in helping the Bolsheviks seize power by 1924. The year 1917 was the beginning of Russia's struggle for power as the second revolution triggered major social, political and economic changes. ...read more.

They used Democratic centralism to show that the Bolshevik?s were being democratic; it was to show the people of Russia that the Bolsheviks were for democracy and not against it, but this was not typical democracy of the public voting for the public to elect there leader and to choose the government that ruled their country. This was the idea that the party would decide on what would happen on a matter, but it gave the Russian public peace of mind that there government was partly democratic. Lenin and the Bolsheviks were also aware of how important political press was. The Bolsheviks had pumped enormous amounts of money into their own papers and periodicals before and during 1917.By banning other opposition papers, they may have prompted significant protests especially from other Socialist parties. However, they may have faced an even greater threat by allowing it to continue. So he banned it in October 1917, he started with the newspapers of the centre and right, and later the socialist press. ...read more.

In November 1917, the Bolsheviks passed the ?Workers Control Decree?. Factory committees were given the right to control production and to ?supervise? management. In October 1917, the Bolsheviks also agreed to a maximum eight-hour day for workers as well as social insurance The collapse of the Romanov dynasty had prompted many national groups to present demands for more self government. The Finns and the Ukrainians were the first to do this. ?The Rights of the People of Russia? decree gave the right of self-determination to the national minorities in the former Russian Empire. To conclude the Bolsheviks took many early measures to consolidate their power between 1917 and 1924, I think the most important was that the Bolsheviks took firm control and knew exactly what they wanted to do and they did it. They also stood strong during the civil war and did not show any signs of weakness. It also helped that there was only one party in charge and most decisions were made by Lenin and only Lenin, this helped to make decisions more effectively and quickly. ...read more.