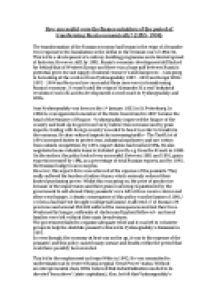 How successful were the finance ministers of the period of transforming Russia economically? (1855-1904)

﻿How successful were the finance ministers of the period of transforming Russia economically? (1855-1904) The transformation of the Russian economy had begun in the reign of Alexander II in response to the humiliation in the defeat in the Crimean war of 1854-56. This led to a development of a railway-building programme and a limited spread of factories. However, still, by 1881, Russia?s economic development still lacked far behind that of Western Europe and there was a huge gulf between Russia?s potential, given its vast supply of natural resource?s and manpower. . I am going to be looking at the works of Ivan Vyshnegradsky 1887 - 1892 and Sergei Witte 1892 - 1904 and focus on how successful these men were in transforming Russia?s economy. It wasn?t until the reign of Alexander III a real ?industrial revolution? took off, and its developments owned much to Vyshnegradsky and Witte. Ivan Vyshnegradsky was born on the 1st January 1832 in St. ...read more.

The government failed to organize adequate relief and it was left to volunteer groups to help the destitute peasant?s, this led to Vyshnegradsky?s dismissal in 1892. So even though, the economy at first was on the up, it was to the expense of the peasants? and this policy caused many unease and deaths within the period that could have possibly been avoided. This led to the employment as Sergei Witte in 1892. He was committed to modernization at to reserve Russia original ?Great Power? status. Without an entrepreneurial class, Witte believed that industrialization needed to be directed ?from above? (state capitalism). Also, he felt that Vyshnegradsky?s policies essentially were correct, and that economic development would lead to improved living standards and this in turn would reduce revolutionary activity and unrest. For economic growth to be achieved, 3 key problems needed to be solved and to continue the policy of protective tariffs, heavy taxation and forced export to generate capital. ...read more.

The railways stimulated the development of iron and coal industries and encouraged the founding of new industrial areas along their lengths; transport costs fell bringing down the prices of goods. However, other forms of transport developed but slowly with less investment. River and sea navigation improved with more steam ships but most of the overseas trade was carried in foreign ships, the roads still remained poor. However, it promised more than it delivered, and parts of the railway were still incomplete in 1914. The Trans ? Siberian railway proved a huge drain on finances, in fact under Witte the state budget was doubled, eating the the profits of economic growth. Also, Witte was too dependent of foreign loans and investments, which had to be paid back with interest. In conclusion, Vyshnegradsky had little impact on transforming Russia economically; even some improvements were made, it could be argued that his region was a drastic failure as it resulted in the deaths of hundreds and thousands of people due to famine. Wittes achievement?s were significant even with the limitations. ...read more.