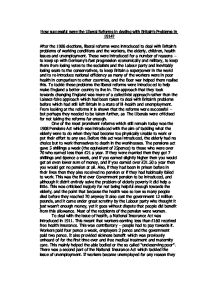 How Successful were the Liberal Reforms in dealing with Britain's problems in 1914?

How successful were the Liberal Reforms in dealing with Britain's Problems in 1914? After the 1906 elections, liberal reforms were introduced to deal with Britain's problems of working conditions and the workers, the elderly, children, health issues and unemployment. These were introduced for a number of reasons - to keep up with Germany's fast progression economically and military, to keep them from losing votes to the socialists and the Labour party and inevitably losing seats to the conservatives, to keep Britain a superpower in the world and to re-introduce national efficiency as many of the workers were in poor health in comparison to other countries, and the Boer war helped them realise this. To tackle these problems the liberal reforms were introduced to help make England a better country to live in. The approach that they took towards changing England was more of a collectivist approach rather than the Laissez-faire approach which had been taken to deal with Britain's problems before which had still left Britain in a state of ill-health and unemployment. ...read more.

and it came under great scrutiny by the Labour party who thought it just wasn't enough money, yet it goes without dispute that people did benefit from this allowance. Most of the recipients of the pension were women. To deal with the issue of health, a National Insurance Act was introduced in 1911. This meant that workers earning less than �160 received free health insurance. This was contributory - people had to pay towards it. Workers paid four pence a week, employers 3 pence and the government paid two pence. It also provided sickness benefit which was previously unheard of for the first time ever and free medical treatment and maternity care. This mainly helped the able bodied or the so called "undeserving poor". There was a second part of the National Insurance Act which tackled the issue of unemployment. If workers became unemployed for any reason they would be given a benefit for 15 weeks so that they could get themselves back on their feet. ...read more.

This liberal reform was seen as the most successful out of the rest of them. The Liberals also set up reforms for the workers. The 1906 Trade Disputes Act made it so that workers didn't have to pay the losses caused by a strike, and the 1906 Compensation Act made it so that people had more of a motive to work because they would get paid for any injuries that may have been had at work. In 1908 the hours that miners had to work were decreased, and in 1909 labour exchanges were set up to help people find work, by providing today's equivalent of Job Centres. By 1914 they had found a million people jobs so this was seen as a success; however the new jobs were only temporary. Yet some of the reforms didn't help everyone, they helped a large majority of the British public. Overall they were seen as successful but perhaps they could have been taken a bit further. These were seen as leading the way to a welfare state. ?? ?? ?? ?? ...read more.