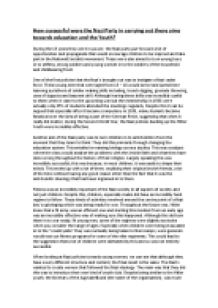 How Successful Were The Nazi Party In Carrying Out Their Aims Towards Education And Youth?

﻿How successful were the Nazi Party in carrying out there aims towards education and the Youth? During the 13 years they were in power, the Nazi party put forward a lot of opportunities and propaganda that would encourage children to be inspired and take part in the National Socialist movement. These were also aimed to turn young boys in to selfless, strong soldiers and young women in to the soldiers of the household and childbearing front. One of the first policies that the Nazi?s brought out was to instigate a Nazi cadet force. These young men that were aged from 13 ? 18 would arrive and spend time learning a plethora of soldier making skills including, trench digging, grenade throwing, uses of dugouts and bayonet drill. Although having these skills was incredibly useful to them when it came to the upcoming war but the membership in 1938 were actually only 25% of students attended the meetings regularly. ...read more.

This ended up with a lot of them, snubbing their original Jewish friends, a lot of the time without having any good reason other than the fact that it was the anti-Semitic ideology that had been ingrained in to them. Fitness was an incredibly important of the Nazi society in all aspects of society and not just children. Despite this, children, especially males did have an incredibly hard regime to follow. These kinds of activities revolved around the centre point of a Nazi boy?s upbringing which was being ready for war. Throughout the future war, Hitler knew that a fit army was an efficient one and starting this mindset from an early age was an incredibly effective way of making sure this happened. Although this did turn them in to war ready, fit young men, some of the regimes were slightly excessive when you consider the range of ages. ...read more.

On the other hand it can be argued that they were successful due to the fact that a lot more girls went to them than boys did to the Hitler Youth pre 1939. This resulted in a lot of becoming part of the Nazi ideal almost through accident. Adolf Hitler knew that children were the future of the German race, for this reason he spent a lot of time, money and effort in to securing this ideological legacy through numerous policies and organisations. Overall these were largely successful in getting across his message. The evidence for this is most prominent, towards the end of the war where children as young as 12 and 13 were taking part in the fighting. Even when the Soviet Red Army was knocking on the door of Berlin, children fought, almost fanatically to defend the Nazi ideal to their last breath, their minds shrouded by the fact that they had never really been apart of anything else but the German Third Reich. ...read more.