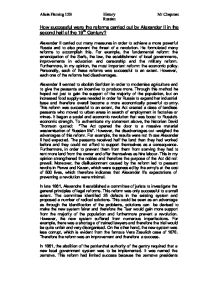 How successful were the reforms carried out by Alexander II in the second half of the 19th Century?

How successful were the reforms carried out by Alexander II in the second half of the 19th Century? Alexander II carried out many measures in order to achieve a more powerful Russia and to also prevent the threat of a revolution. He formulated many reforms to accomplish this. For example, the fundamental reform: the emancipation of the Serfs, the law, the establishment of local governments, improvements in education and censorship and the military reform. Furthermore, in my opinion, the most important reform: the economic policy. Personally, each of these reforms was successful to an extent. However, each one of the reforms had disadvantages. Alexander II wanted to abolish Serfdom in order to modernise agriculture and to give the peasants an incentive to produce more. Through this method he hoped not just to gain the support of the majority of the population, but an increased food supply was needed in order for Russia to expand her industrial base and therefore overall become a more economically powerful country. This reform was successful to an extent, the Act created a class of landless peasants who moved to urban areas in search of employment in factories or mines. It began a social and economic revolution that was boost to Russia's economic strength. ...read more.

This reform had limited success because the zemstva presidents were appointed rather than elected and therefore this undermined their authority and made the new government seem unimportant and therefore the people would not take notice of their commands. However, the zemstva was successful, because it was able to operate successfully under the economic budgets they had been allowed. Many improvements were made in the provision of local services, particularly education. Leading on from my last statement, the zemstva had great success within the education reform. The standard of teaching in elementary education had been generally poor and the zemstva successfully improved the standards through administrating local primary schools through school boards. For example, there was a large increase in the number of primary schools from 8, 000 in 1856 to over 23, 000 in 1880. Furthermore, the secondary education was modernised and the number of students increased to around 800, 000 in the first decade of Alexander's reign, which indicates a successful improvement in the system. However, the further developments to liberalise the whole system of education and censorship in Russia were made impossible by the assassination attempts made on the Tsar in the later part of his reign. ...read more.

However, the reform did have some success, because the currency was stabilised when Witte conformed to the western practice in the 1890s and placed Russia on the Gold Standard. Furthermore, railway construction, financed through an increasing number of credit institution was a key element in the economic policy. The growth of railways helped to link the grain producing areas with towns, cities and ports, therefore contributing to the promotion of exports. In my opinion, this would build up the economy, which would make Russia a richer and therefore more powerful country. I have considered the reforms of Alexander II and I have well thought-out the amount of their success. In my opinion, the reforms were nothing more than 'half hearted' concessions and I believe that they had limited success; they were only significant on a small scale. Furthermore, I believe the reforms were an attempt to perpetuate the existing political system and in this way the reforms failed to create popular support for the Tsarist regime. On the other hand, the reforms were successful because they were a radical comparison to the previous Russian experience, but it did not go far enough to sustain the Tsarist regime, because in my opinion, the majority of the population desired a democracy, which the Tsar did not want to give and therefore he was fighting a losing battle. Alicia Fleming 12B History Mr Chapman Russian ...read more.