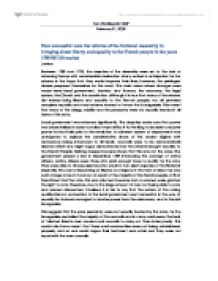 How successful were the reforms of the National Assembly in bringing about liberty and equality to the French people in the years 1789-93?

How successful were the reforms of the National Assembly in bringing about liberty and equality to the French people in the years 1789-93? (24 marks) Justice Between 1789 and 1793, the deputies of the Assembly were set to the task of reforming France with considerable dedication. Many waited in anticipation for the reforms in the hope that they would improve their lives; however, the privileged classes prepared themselves for the worst. The main areas where changes were made were local government, taxation and finance, the economy, the legal system, the Church and the constitution. Although it is true that many of the reforms did indeed bring liberty and equality to the French people, not all provided complete equality and most reforms tended to favour the bourgeoisie. This meant that many of the clergy, nobility and the peasantry were not equally treated in all terms of the state. Local government was reformed significantly. The deputies made sure that power was decentralised in order to make it more difficult for the King to be able to recover power he had held prior to the revolution. A coherent system of departments was anticipated to replace the administrative chaos of the ancien r�gime with democracy being introduced to all levels. Councils were to be democratically elected which one might argue demonstrates how the reforms brought equality to the French People. ...read more.

Firstly, it opened up much of the French lands to the populace - something that could be deemed as a move in the direction of equality. However, the sale of Church land and the removal of tithes significantly reduced the income of the Church and they were unable to provide relief for the poor and needy. There was an urgent need for a national organisation financed by taxation, to take over this role. The Assembly however could not afford to deal with such a large problem and it was left alone. This shows that again the poorer citizens of France no longer had the help once provided by the ancien regime nor the opportunities that the bourgeoisie had after the reforms. I believe this shows that although equality was presented by the reforms, it was not present in practice. The reforms did however make the Church considerably fairer through the reforms. The Assembly wanted to create a Church that was free from foreign control, linked to the new system of local government, and linked closely to the State. In August 1789, the Assembly abolished the tithe, annates and pluralism and ended the don gratuit in favour of a fair taxation system. The Civil Constitution of the Clergy was approved 12th July 1790. This reformed the organisation of the Church reduced the amount of bishoprics from 135 to 83 and attempted to extend democracy throughout the Church; all priests and bishops would have to be elected into their posts. ...read more.

With the ruling that somebody had to be brought to court within 24 hours of being charged and lettres de cachet being abolished created a far fairer system of justice and as a result gave the people of France greater liberty. The reforms brought in by the National Assembly from 1789-93 were greatly intended to create a more equal state where birth and money were not defining factors. Despite this, the introduction of active citizens, although going somewhat in the way of giving the vote to the people, did not go far enough to provide equality en masse, many men could not afford to vote and women were disregarded. This led to the rich bourgeoisie gaining control, and so money rather than skill was a defining factor in who got into office. The reforms on taxation were effective in creating a fairer taxation system, although the entire country was not equal, with certain areas paying greater amounts of tax. The reformation of the Church and the economic hardships facing the young Assembly caused them to sell of Church land - greatly helping the bourgeoisie but caused the Church no longer to be able to care for the poor. I think that although the reforms were put in place with good intentions, they allowed the bourgeoisie to rise to power in government rather than creating equality. Equality would have taken a lot longer than three years of reforms to take place. ?? ?? ?? ?? Tom Wroblewski 12MP February 21, 2009 ...read more.