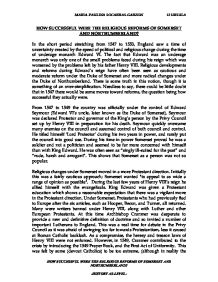 How Successful Were the Religious Reforms of Somerset and Northumberland?

HOW SUCCESSFUL WERE THE RELIGIOUS REFORMS OF SOMERSET AND NORTHUMBERLAND? In the short period stretching from 1547 to 1553, England saw a time of uncertainty created by the speed of political and religious change during the time of underage monarch Edward VI. The fact that Edward was an underage monarch was only one of the small problems faced during his reign which was worsened by the problems left by his father Henry VIII. Religious developments and reforms during Edward's reign have often been seen as cautious and moderate reform under the Duke of Somerset and more radical changes under the Duke of Northumberland. There is some truth in this notion, though it is something of an over-simplification. Needless to say, there could be little doubt that in 1547 there would be some moves toward reforms, the question being how successful they actually were. From 1547 to 1549 the country was officially under the control of Edward Seymour (Edward VI's uncle, later known as the Duke of Somerset). Seymour was declared Protector and governor of the King's person by the Privy Council set up by Henry VIII in preparation for his death. Seymour quickly overcame many enemies on the council and assumed control of both council and control. ...read more.

yet he was also very unsuccessful in satisfying the more radical protestants due to the fact his moves were far too moderate for their disposition. The Duke of Somerset fell from power on October 1549 having his confidence undermined by the rebellions taking place in England at the time. Many councillors resented him for taking the title of 'Lord Protector' and for not being properly consulted about matters of policy. It is not immediately clear how religion was to be affected by the fall of the Duke of Somerset. However many historians are convinced of the Duke of Northumberland's (Somerset's successor) genuine belief in Protestantism. His support for the radical John Hooper certainly supports this suggestion. When Northumberland came into power in 1550, his position was insecure, mainly because he was not trusted by his conservative allies. Under the leadership of the Earl of Southampton, these allies conspired to remove him. Nevertheless, Northumberland was able to overcome this challenge in February 1550 and was thereby able to remove the conservatives from their positions within government. His defeat of the Earl of Southampton and the conservatives made sure that he would follow the protestant path. ...read more.

He moved far too forward, far too soon. The religious situation in England by the time that Northumberland took the chair had therefore changed dramatically from how it had been at the end of Henry VIII�s reign. Even though Somerset had sparked two rebellions supposedly due to his religious policy one can say that the ultimate cause of his downfall was the hopelessly unpopular position that he had developed amongst the people of England. Though altogether not completely successful and yet far more successful than Somerset, Northumberland knew that any religious change that he implemented could give his enemies an alibi to rebel against. It may, however, be said that some of the council radicals had found Somerset's religious policy unsatisfactorily modest. Many wanted radical change and they realised that Northumberland shared their views. In this way there was pressure put on Northumberland to take the next step towards Protestantism and to radicalise religious policy. Fortunately Northumberland believed that further radicalisation was the key process in tiding up the damage that Somerset had left behind. In this sense he was far more successful than Somerset in religious reforms as he confirmed he had popular support from a certain group of religious people and then went forward with an objective instead of 'diving in at the deep end' and leaning towards a religious outlook when not having any popular support, like Somerset. ...read more.

This is a very well written response that advances a clear argument and offers a clear judgment in the conclusion. It is however, quite narrow in its focus with little reference to the wider public's reaction to the reforms and quotes should have been attributed to sources. 4 out of 5 stars.