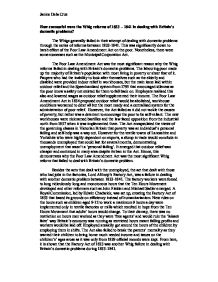 How successful were the Whig reforms of 1833 1841 in dealing with Britains domestic problems?

How successful were the Whig reforms of 1833 - 1841 in dealing with Britain's domestic problems? The Whigs generally failed in their attempt of dealing with domestic problems through the series of reforms between 1833-1841. This was significantly down to harsh effect of the Poor Law Amendment Act on the poor. Nonetheless, there were some successes such as the Municipal Corporation Act. The Poor Law Amendment Act was the most significant reason why the Whig reforms failed in dealing with Britain's domestic problems. The labouring poor made up the majority of Britain's population with most living in poverty or sheer fear of it. Paupers who had the inability to look after themselves such as the elderly and disabled were provided indoor relief in workhouses, but the main issue laid within outdoor relief and the Speenhamland system from 1795 that encouraged idleness as the poor know a safety net existed for them to fall back on. Employers realised this also and lowered wages as outdoor relief supplemented their income. The Poor Law Amendment Act in 1834 proposed outdoor relief would be abolished, workhouse conditions worsened to deter all but the most needy and a centralised system for the administration of poor relief. ...read more.

Although the newly created Education Department of the Privy council gave the societies a grant of �30,000 in 1839, the meagre amounts were not powerful enough to create anything special, supported by the fact state education was not established. The lack of change confirms that the government grant for education was a failed Whig reform that did not deal with Britain's domestic problems. Whilst the Church was given funding for education, there were problems with the Church in Ireland, even after the Irish Church Act in 1833. 90% of the population in Ireland were Catholic but had to pay tithes and church rates towards 22 bishops and 2500 parishes that belonged to the Church of Ireland, and consequently this caused disruption as seen by the tithe war that started in 1831. This led to passing of the Irish Church Act, which reduced the number of bishops and abolished parishes where there were no Anglican churchgoers. Nonetheless they were unsuccessful in attempting to appropriate the surplus income of the church for secular purposes like education. There was a Irish Tithe Act in 1838 that transferred the payment of tithes from tenant to landlord, yet this made no difference the to peasants as landlords passed the burden of the tithe to the peasant via increased rents. ...read more.

Non-conformists and Catholics were permitted to marry in their own churches in 1836, whilst the Anglican monopoly on marriage and funeral services was broken through the introduction of a civil register on births, civil marriages and funerals. University College London granted entrance and degrees to anyone irrespective of religious allegiance. In spite of this, the traditional universities of Oxford and Cambridge refused to follow suit. The Church Rates Bill, which transferred upkeep costs of churches from parishioners to church funds, was rejected by the Commons. This demonstrates that there was some success in the Church reforms, but as always were still limited showing that Whig reforms did not successfully deal with Britain's domestic problems. In conclusion, the decade of reform in which the Whigs attempted to deal with Britain's domestic problems was overall a failure, mainly due to the shortcomings of the Poor Law Amendment Act as well as other factors such as the 1833 Factory Act. Some successes arose such as the Church reforms and the Municipal Corporation Act, yet these successes were limited each time, suggesting that the Whig reforms of 1833-1841 were unsuccessful in dealing with Britain's domestic problems. ?? ?? ?? ?? Janine Dela Cruz ...read more.