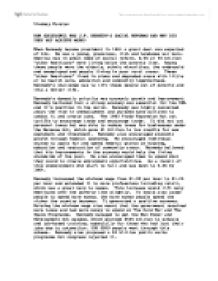 How successfull were JFKs social reforms?

HOW SUCCESSFUL WAS J.F. KENNEDY'S SOCIAL REFORMS AND WHY DID THEY NOT ACHIEVE MORE? When Kennedy became president in 1961 a great deal was expected of him. He was a young, glamorous, rich and handsome war hero. America was in great need of social reform. 6.5% or 40 million "other Americans" were living below the poverty line. Among these people were the elderly, ethnic minorities, the underpaid and unemployed and people living in poor rural areas. These "other Americans" lived in slums and degraded areas with little or no health care, education and community togetherness. Kennedy's challenge was to lift these people out of poverty and into a better life. Kennedy's domestic priority was economic growth and improvement. Kennedy believed that a strong economy was essential for the USA and it's position in the world. Kennedy was highly concerned about the rise in unemployment and pursued many policies to combat it and create jobs. ...read more.

2 Kennedy also passed the Area Redevelopment Act. This Act gave grants and loans for training, development community facilities and help for depressed areas such as Appalachia. The government spent more than $500 million on various schemes and programmes. However this Act was highly criticised for not providing enough jobs considering the money that was spent. Cleaning up slums and adding community facilities such as youth centres, community centres and leisure centres would provide the people in these depressed communities with entertainment and hopefully drive them away from drugs, petty crimes and vandalism. Adding these facilities would also create jobs and tackle the issue of unemployment. His 1961 proposals for education were passed by the Senate but failed to get through the House. This unsuccessful bill proposed to give federal money to states for scholarships and buildings, with most of the money going to the poorer states. There had been very little spending on schools for 20 years and there was a shortage of teachers but none of this helped the Bill to succeed. ...read more.

Kennedy proposed many Bills for the improvement of America's poorer areas but they were simply rejected by the Senate and the House such as his housing and education policies. Kennedy also had a lack of support in The White House. They disliked him because of his glamour, good looks and his age. Therefore they objected to his ideas and undermined him. He also lacked support from the white house because of his narrow electoral victory. Many Southern Democrats disliked his Northern Liberalism and ambition and Kennedy did nothing to change this perception of him. Kennedy's social reforms achieved very little. This was partly due to his keen interest in foreign policy and somewhat lack of interest in social policy. However, his opposition in The White House stifled his success largely. Kennedy was assassinated in November 1963 and so he was only in office for just over two and a half years, a very small period of time to reform a country but more could have been done. Lindsay Forster ...read more.