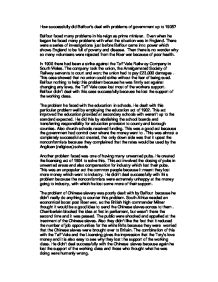 How successfully did Balfours deal with problems of government up to 1905?

How successfully did Balfour's deal with problems of government up to 1905? Balfour faced many problems in his reign as prime minister. Even when he began he faced many problems with what the situation was in England. There were a series of investigations just before Balfour came into power which shows England to be full of poverty and disease. Then there is no wonder why so many volunteers were rejected from the Boer war because of poor health. In 1900 there had been a strike against the Taff Vale Railway Company in South Wales. The company took the union, the Amalgamated Society of Railway servants to court and won; the union had to pay �23,000 damages. ...read more.

schools Another problem faced was one of having many unwanted pubs. He created the licensing act of 1904 to solve this. This act involved the closing of pubs in unwanted areas and also compensation for industry which lost their pubs. This was an unpopular act the common people because it meant they lost more money which went to industry. He didn't deal successfully with this problem because the nonconformists were extremely unhappy at the money going to industry, with which he lost some more of their support. The problem of Chinese slavery was poorly dealt with by Balfour because he didn't really do anything to counter this problem. South Africa needed an economical boost post Boer war, so the British high commander Milner thought it would be a good idea to send the Chinese slaves across to them. ...read more.

The idea of tariff reform is to protect the home produced food and manufactured goods by putting duties on imports from abroad. Joseph Chamberlain and the Tariff reform was yet another problem faced by Balfour and his government. Chamberlain thought that tariff reform would win him popularity even tough all the claims were based on assertion rather then firm evidence. Chamberlain was an imperialist and wanted to help the empire. Before now Britain had free trade. Chamberlain wanted to keep trade so it would bring the empire closer together. This would also make it cheaper within the empire and bring prosperity to the empire. Britain relies on imports having lost agriculture. Free trade keeps prices low. Britain's two largest competitors, U.S. and Germany had import taxes on British goods. ...read more.