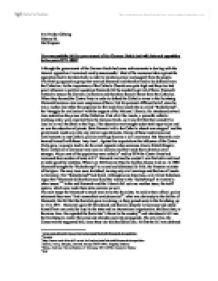 How successfully did the government of the German Reich deal with internal opposition in the years 1871-1890?

Eva Frauke G�hring History HL Ms Simpson How successfully did the government of the German Reich deal with internal opposition in the years 1871-1890? Although the government of the German Reich had some achievements in dealing with the internal opposition it remained mostly unsuccessful. Most of the measures taken against the opposition had to be taken back in order to maintain power and support from the people. The first big opposition group that worried Bismarck and therefore had to be defeated were the Catholics. As the importance of the Catholic Church was quite high and they also had great influence in political questions Bismarck felt he needed to get rid of them. Bismarck wanted to ensure the German Unification and therefore feared a threat from the Catholics. When they formed the Centre Party in order to defend the Catholic views in the Reichstag Bismarck became even more suspicious of them. Not his personal different belief, since he was a Junker, but rather the suspicion he felt made him launch the so called "Kulturkampf", the "struggle for civilisation" with the support of the National Liberals. ...read more.

As said in their official policy statement they were "Anti-monarchist revolutionaries"5, what was obviously to the dislike of Bismarck. He felt that the Socialist grew too strong, as they gained seats in the Reichstag, up to 12 in 1877. Bismarck again felt threatened and feared a disunity in Germany and asked himself how one could be loyal to the state and an international organisation, the Socialists, at the same time. He regarded the Socialists "a threat to the country"6 and introduced a bill into the Reichstag to control the press and abandon socialist propaganda. His new allies, the Conservatives supported him, since they also disliked Socialism. At first the bill was defeated and the party gained even more seats. But after two assassination attempts on the Kaiser's life, which Bismarck connected to Socialism, he tried to introduce the anti-socialist law again and this time succeeded. Although the law didn't ban the SPD directly, it banned any meetings that aimed to spread their views, outlawed trade unions and closed several newspapers. Historian William Carr stated that "this law had the same traumatic effect on Socialists that the May Laws were having on ...read more.

The French in Alsace-Lorraine also rather identified with France than Germany. The territory was won from France in 1871. The people, although a lot spoke German, considered themselves as French. Bismarck dealt with this through administering Alsace-Lorraine by the Reich government and they had no representation in the Federal Council. The last group to be feared were the Poles. They were by far the largest non-German minority in the Reich and were mostly Catholic. Therefore they also did not appreciate the 'Kulturkampf'. As they spoke polish, Bismarck tried to 'germanise' them by prohibiting to speak their language and forced the German language on them. In schools etc. German was to be spoken. This suppressed their national feelings and as already seen with the Catholics and their belief, made them wanting to speak their own language even more. In conclusion, none of the internal oppositions in the German Reich could be dealt with successfully. The 'Kulturkampf', 'state socialism' and other attempted implementations, like the enforcement of the German language, failed to most extend. Although they left some marks and achieved some changes, like the 'Kulturkampf' the civil marriage and 'state socialism' the welfare measures, they had to be repealed, so Bismarck wouldn't lose even more support and possibly his own face. ...read more.