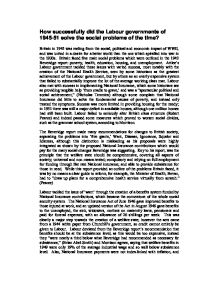 How successfully did the Labour governments of 1945-51 solve the social problems of the time?

How successfully did the Labour governments of 1945-51 solve the social problems of the time? Britain in 1945 was reeling from the social, political and economic impact of WWII, and was united in a desire for a better world than the one which spiralled into war in the 1930s. Britain faced five main social problems which were outlined in the 1942 Beveridge report: poverty, health, education, housing, and unemployment. Attlee's Labour government tackled these issues with varied success, most notably with the creation of the National Health Service, seen by some historians as the greatest achievement of the Labour government, but by others as an overly expensive system that failed to substantially improve the lot of the average working class man. Labour also met with success in implementing National Insurance, which some historians see as providing tangible help 'from cradle to grave,' and was a "spectacular political and social achievement," (Nicholas Timmins) although some complain that National Insurance did little to solve the fundamental causes of poverty, and instead only treated the symptoms. Success was more limited in providing housing for the needy; in 1951 there was still a major deficit in available houses, although one million homes had still been built. ...read more.

By June of 1948, 90% of doctors had agreed to enter the NHS. Charles Webster, the official NHS historian, is very critical, saying that this partial privatisation resulted in a grossly unfair healthcare system which benefited the wealthy far more than the working classes. The NHS was also faced with a large backlog of untreated ailments: 8.5 million had dental treatment; and 5 million pairs of glasses were produced in the first year of the NHS. In consequence, the NHS became very expensive, costing �358 million in 1950, even though prescriptions were never completely free, which was a necessary though unfortunate aspect of the NHS. Some historians, such as Correlli Barnett, link increased welfare spending with British decline, however Robert Pearce disagrees, pointing to successful competitors who spent more on social services. Martin Pugh argues that the reforms were in fact very cost effective due to the huge benefits of a healthy population. Undoubtedly, Labour's success was very real as is evident from the vast number of prescriptions (187000 prescriptions issued by 18000 doctors in the first year) and tangible results for many millions, despite the difficult economic circumstances resulting from the war. ...read more.

Labour's policies, according to Arthur Marwick, clearly show their commitment to the idea of a welfare stare. They provided support for the poorest; free access to decent medical care; benefits for the elderly and unemployed; and eliminated the worst in slum housing, thus, in David Dutton's view, continuing the work of the wartime coalition government. Woodroffe praises the welfare state for removing barriers and de-stigmatising poverty. While this is true, some barriers remained, such as the unfair education system, which favoured the wealthy and divided society. Pearce says that "Labour largely fulfilled its manifesto commitments, despite an adverse economic climate," and Hennessy agrees, calling Attlee's government this century's "most hyper achieving peace time administration." This is evidenced by the remarkable 347 Acts passed by the Labour government. Some historians, however, are less enthused, pointing to the lack of serious nationalisation, redistribution of wealth or social class change, saying that the fundamental causes of poverty were not tackled thoroughly enough: "One per cent of the population owned 80 per cent of the country's private capital around 1950." (Pearce) Despite these limitations, however, the Labour government of 1945 to 1951 was largely successful in reducing poverty, providing benefits, healthcare, and dealing with the social problems of the time. ?? ?? ?? ?? ...read more.