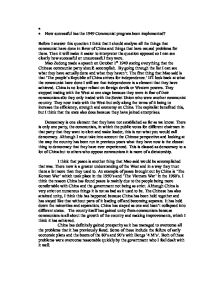 How successfully has the 1949 Communist program been implemented?

* * How successful has the 1949 Communist program been implemented? Before I answer this question I think that I should analyze all the things that communist have done in favor of China and things that have caused problems for them. Then it will make it easier to interpreter the question apposed so I can see clearly how successful or unsuccessful they were. Mao Zedong made a speech on October 1st 1949 stating everything that the Chinese communist party should accomplish. By going through the list I can see what they have actually done and what they haven't. The first thing that Mao said is that 'The people's Republic of China strives for independence.' If I look back at what the communist have done I will see that independence is a element that they have achieved. China is no longer reliant on foreign devils or Western powers. They stopped trading with the West at one stage because they were in fear of their communism s0o they only traded with the Soviet Union who were another communist country. ...read more.

There now is a greater understanding of the West and in a way they trust them a lot more than they used to. An example of peace brought out by China is 'The Korean War' which took place in the 1950's and 'The Vietnam War' in the 1960's. I think the reason China has found peace is mainly due to the people being more comfortable with China and the government not being as strict. Although China is very strict on numerous things it is not as bad as it used to be. The Chinese has also attained unity, I think this has happened because China has been held together and has stayed like that without parts of it leading off and becoming separate. It has held down the minorities and separatists. China has stayed as one and hasn't collapsed into different states. The county itself has gained unity from communism because communism is all about the growth of the country and making improvements, which I think it has achieved. ...read more.

As I mentioned before they have kept China together as one, which is a very good thing as many large counties have collapsed and separated into smaller parts. I think that they were successful but only to a certain extent as communism is about the growth or the country and trying to improve it and I think that they have accomplished that. The communist party tried to make sure everyone was treated equally and fairly and I think that this worked because when the great leap forward was launched everyone was paid exactly the same amount and had the same living standards as each other, although the great lead forward was actually unsuccessful. The thing that I dislike about communism was that fact that no one had the choice to vote for anyone else in opposite parties, as there was only one party to vote for in political elections and the government claimed to be running the country on behalf of the workers which in a way I think is untrue. This answers the question opposed, which asked how successful the 1949 communist programme was. ...read more.