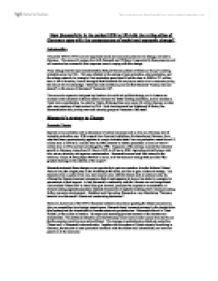 How Successfully in the period 1870 to 1914 did the ruling elites of Germany cope with the consequences of social and economic change?

How Successfully in the period 1870 to 1914 did the ruling elites of Germany cope with the consequences of social and economic change? Introduction The period 1870 to 1914 involved significant social and economic pressures for change, not least in Germany. This essay will analyse how both Bismarck and Wilhelm II responded to these pressures and will examine how successful their responses were in coping with this change. A key change was the rapid industrialisation that put Germany ahead of Britain as Europe's leading industrial power by 1914. This was reflected in the soaring of coal production, steel production, and the railway network, for example. Coal production grew from 89 million tons in 1890 to 277 million tons in 1914. However, it could be argued that Bismarck did not play an active role in economic policy, but did use it to his advantage. Historians such as Bohme point out that Bismarck "merely rode and steered" on the waves of Germany's "economic life". The economic expansion had great implications for social and political change, as for instance an increase in the industrial workforce lead to demands for better working conditions, and an increase in Trade Union membership. As noted by Culpin & Henig, there were some 2.6 million German workers who were members of trade unions by 1914. Such developments had frightened Wilhelm, like Bismarck before him, as they saw such minority groups as "enemies of the state". Bismarck's strategy to Change Economic Change Spurred on by unification and an abundance of natural resources such as iron ore, Germany saw its industrial production soar. With support from financial institutions, this transformed Germany from what had been a predominantly agrarian to a major industrial state. ...read more.

Whilst the Reichstag could comment on legislation, Bismarck had the power to veto anything. The parties in the Reichstag were more like sectional pressure groups, with membership centred around social class origins. Max Weber supports this viewpoint, noting that the German political system was merely "sham constitutionalism". AJP Taylor sums up Bismarck's stance to democracy very effectively, in stating that "Bismarck lived in an age of democracy and German power and he devoted his life to making these forces as harmless as possible". This did not bode well for the future, as Weber comments, "Bismarck left behind him as political heritage a nation without any political education". He also emphasised that the country was accustomed that the statesman at its head would look after all policy for it. Bismarck wanted to be aware of potential threats to the state he had created, and once himself stated "when we have arrived at good harbour, we should be content to cultivate and hold what we have won". In order to protect what he had achieved in a unified Germany, and in response to European pressure, Bismarck used his unique negotiating skills to forge a number of alliances, in an attempt to ensure European peace and avoid war on two fronts. A number of alliances were attempted to preserve peace in Europe, beginning with the "dreikeiserbund", or league of 3 emperors in 1873, (involving alliances with Russia and Austria), and later a separate dual alliance with Austria alone, with Italy coming into the Fray in the late 1880s. Whilst these alliances in the main failed to run smoothly, they did at least restore order in Europe and ensure that the changes taking place in Germany were not impeded by an outside conflict. ...read more.

Bulow suggested that the pace of economic expansion forced the need for colonisation: "Our need for national development, mainly in the industrial sphere, forced us to cross the ocean". In spite of the fact that Germany was planning colonisation very late compared to other powers, the Kaiser built up the German military machine and under the Tirpitz Plan, and built a naval fleet to rival that of Great Britain. The term "saber rattler" sums up his politics as well as his personality. Historian Barbara Tuchman put it appropriately when she referred to the Kaiser as "possessor of the least inhibited tongue in Europe". The Kaiser clearly wanted a world role for Germany, but the physical results of Weltpolitik were somewhat meagre. Conclusion The reaction on the part of both Bismarck and Wilhelm to the increasing but modest demands for social and political reform was to try to repress the forces of change, as both saw socialism as a significant threat to the regime. The key difference between Bismarck and Wilhelm was that Bismarck realised that he could not defeat socialism by repression alone. Comparing the policy styles of Bismarck and Wilhelm, it appears that in spite of Bismarck's adherence to "real politik", he still maintained a clearer sense of direction than Wilhelm, whose policies seemed ill thought out and lacking direction. As noted by Mosse, "although Bismarck played his hand with great skill, it was a good one in the first place". Sturmer supports this argument by stating that "Bismark was good at diplomatic games". It is clear then that when the regime fell into the hands of Wilhelm, who according to Rhal "dreamt up policies, pursued and made a mess of policies", there were socio-political implications for Germany, which it seemed by 1914 could only be alleviated by a short, sharp, victorious war. ...read more.