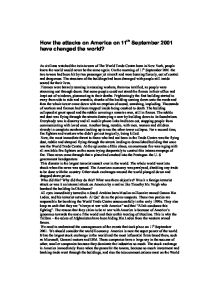 How the attacks on America on 11th September 2001 have changed the world?

How the attacks on America on 11th September 2001 have changed the world? As civilians watched the twin towers of The World Trade Centre burn in New York, people knew the world would never be the same again. On the morning of 11th September 2001 the two towers had been hit by two passenger jet aircraft and were burning fiercely, out of control and dangerous. The structure of the buildings had been damaged with people still inside scared for their lives. Firemen were bravely running in rescuing workers, them too terrified, as people were streaming out through doors. But some people could not stand the flames in their office and leapt out of windows, plummeting to their deaths. Frighteningly the first building started to sway from side to side and crumble, chunks of the building coming down onto the roads and then the whole tower came down with an eruption of sound, smashing, imploding. Thousands of workers and firemen had been trapped inside being crushed to death. The building collapsed at great speed and the rubble covering a massive area, still in flames. The rubble and dust was flying through the streets destroying a near by building down to its foundations. Everybody was in disarray and all mobile phone links had been cut, stopping people from communicating with loved ones. ...read more.

Could this mean that there were some sick people trying, and succeeding to make money out of innocent civilians deaths? If this true, U.S intelligence services may have to closely monitor all finance and trade taking place throughout the world for years to come, especially in America. Airlines are in a very difficult situation at the moment. A lot of experts have blamed U.S airports and airport security regulations for leaving America so vulnerable to such an attack. In America the customs regulations are very relaxed for internal flights. Bags are rarely checked for weapons and illegal substances. So, in theory, you could easily carry a gun or knife with you in your hand luggage through customs and onto the plane without being caught and prosecuted. This is very ignorant of the fact that America is very prone to a terrorist attack, seeing that it isn't the most popular county in many people's eyes. The worldwide aircraft industry has been thrown into panic, with American Airlines sacking thousands of people due to flights being cancelled and the amount of money being spent on new safety measures. British Airways have made lots of people redundant after lack of money being available, and Swiss Air have even closed down due to lack of demand in flights. It was reported that this company was in a lot of trouble before the attacks on September 11th. ...read more.

These air attacks are now starting to work, with cities now being invaded by the Northern Alliance, but there is still no sign of Osama Bin Laden. This war on Afghanistan has reported to be very accurate as far as air strikes are concerned, but many people have fled cities such as Kabul and are staying in refugee camps and living on rations brought in by the west. Reports suggest that some bombs are unexploded and some have hit houses. But the most tragic report personally is that food parcels have been dropped on land mine fields, so when people go to collect the foods they get injured and even killed by stepping on unexploded mines. The war on terrorism is not going to finish once bin Laden is caught, but is going to be directed at other parts of the world such as Iraq and target enemies of the west, such as Saddam Hussein. There maybe many changes in our country too, with the possible introduction of I.D cards but this may, again, feel like "Big Brother" is watching over you, giving you no privacy. Overall, I think this incident will have a profound effect on the way we live our lives from now on and life, as we know it. More care will be taken on Disabling terrorist networks like Al qui' da and stopping terrorists from harming other people. Hopefully there will be less terrorist attacks thanks to this "War on Terrorism". By Louis Rummer- Downing ...read more.