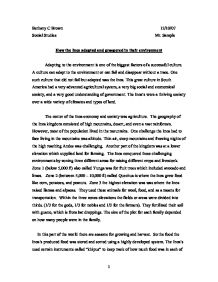 How the Inca adapted and strived in their environment

Bethany C Brown 12/10/07 Social Studies Mr. Sample How the Inca adapted and prospered in their environment Adapting to the environment is one of the biggest factors of a successful culture. A culture can adapt to the environment or can fail and disappear without a trace. One such culture that did not fail but adapted was the Inca. This great culture in South America had a very advanced agricultural system, a very big social and economical society, and a very good understanding of government. The Inca's were a thriving society over a wide variety of climates and types of land. The center of the Inca economy and society was agriculture. The geography of the Inca kingdom consisted of high mountains, desert, and even a vast rainforests. However, most of the population lived in the mountains. One challenge the Inca had to face living in the mountains was altitude. Thin air, steep mountains and freezing nights of the high reaching Andes was challenging. Another part of the kingdom was at a lower elevation which supplied land for farming. ...read more.

An example of adaptation made for their environment was the structure of their houses. Their houses had no windows, to keep in the heat and one door. At the top of the roof they had a circle space where smoke came out of when they had a fire. This was also found in the later Native American homes. The Inca house was made of stone or brick and had a roof made of Ichu. Ichu is coarse grass that sheds rain easily. The used the earth as a floor and slept on wool blankets made from alpacas to sleep. One thing that demonstrates the advancement of the Inca's was that the engineering of building so advanced was that they did not use mortar. They carved the bricks so exactly that they didn't have to use mortar, yet their buildings were still strong. Many of the Inca's buildings can still be visited today. Central to the society was the King's place high in the mountains. The palace was very grand and had lots of gold. ...read more.

During his reign his son helped him conquest land in very bad battles with a tribe in Brazil. The Inca continued to advance their empire by conquering land and by setting up roads to connect parts of the empire. They built bridges to cross various obstacles like rivers and mountains, and created fortresses to defend their lands against invasion. The Inca were an advanced society, but so were the Spanish, the people who conquered them. The fall of the Inca Empire was not due to the environment. This culture had made unique adaptations to their difficult environment and had become a very rich and great society. How the Inca adapted and thrived in their Environment By Bethany Brown 12/21/07 Works consulted for Inca Question two Williams, Patrick Ryan. "Inca." World Book Online Reference Center. 2007. 4 Dec. 2007 <http://www.worldbookonline.com/wb/Article?id=ar273760>. Calliope, "who's who in Inca society." 2000. 4 Dec 2007 <http://discoverer.prod.sirs.com/discoweb/disco/do/article?urn=urn%3Asirs%3AUS%3BARTICLE%3BART%3B00001 Guns, Germs, and Steel, Jared. Diamond. New York: WW Norton and Company, 2005. Watts, Franklin. The Ancient Inca. New York: Scholastic, 2004. Morris, Craig. The Inka empire and its andean origins. New York: Abbeville Press, 1993. Woods, Tim. The Incas. New York: 1996. 1 ...read more.