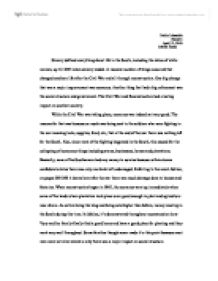 How the novel &quot;Jubilee&quot; shows the changes in southern society caused by the American Civil War. Essay

Evelin Labastida Period 2 April 12, 2010 Jubilee Essay Slavery defined everything about life in the South, including the status of white women, up till 1865 when slavery ended. A massive number of things occurred that changed southern life after the Civil War and all through reconstruction. One big change that was a major improvement was economy. Another thing that had a big refinement was the social structure and government. The Civil War and Reconstruction had a lasting impact on southern society. While the Civil War was taking place, economy was indeed not very good. The reasons for that was because so much was being sent to the soldiers who were fighting in the war meaning tools, supplies, food, etc., that at the end of the war there was nothing left for the South. Also, since most of the fighting happened in the South, this caused for the collapsing of numerous things including stores, businesses, homes and plantations. Basically, none of the Southerners had any money to survive because within eleven confederate states there was only one bank left undamaged. ...read more.

In other words they were the ones taking the men's spot and running the South life. This change is important because at one point slave women were to be nothing more than a master's animal and white women didn't do much. Later, everything changed and the women were doing everything a man would usually do. It impacted lives in the way that families were incomplete and the strong affinity of a man was faded away. Deaths of soldiers leaving women running the big things are seen in Jubilee. For example, when all men had died in Dutton family there was nobody else left to run the house but the women meaning Big Missy and later Lillian. This proves how there was a time where women had to do something to stand up and stand out to win their rights when before they were nothing really important. Although women weren't being treated very equally as men from the 1860's through the end of reconstruction, the government did help them and their families in other ways. ...read more.

Both were in opposition of the freed slaves in having opportunities as well in mentioned in Jubilee. Once the KKK was created, this racial group had attacked an African American lady while Vyry and her neighbors watched her being taken away by the KKK. Sometimes hard times lead to hard measures and risks have to be taken. There were many changes in southern society and culture from early 1860's through reconstruction. All the changes made created a huge impact on not only lives but also on the way many people think. It created new paths and opportunities for some while new problems arose for others. When there was the least possible thought that the South could ever be restored, it actually brought money up and new things were built. When nobody ever thought women were going to be much more than slaves and servants, most took charge while men were at war. When the government wanted the least for the slaves at one point, after the changes in southern society, there they were helping the freed slaves find their way slowly. These ideas were very important that throughout the years, it helped in creating on what is today, equality. ...read more.