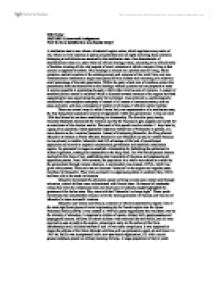 How totalitarian was fascist Italy?

Will Taylor HISTORY Coursework Assignment Part B. How totalitarian was fascist Italy? A totalitarian state is one where a dictatorial regime exists, which regulates every realm of life, where no rival loyalties or parties are permitted and all rights including those normally belonging to individuals are assumed by the totalitarian state. One characteristic of totalitarianism exists in a state where an official ideology exists, consisting of an official body of doctrine covering all the vital aspects of man's existence to which everyone living in that society is supposed to adhere. This ideology is focused on a perfect state of living, which contains a radical rejection of the existing society and conquest of the world for a new one. Totalitarianism constitutes a single mass party led by a dictator and consisting of a relatively small percentage of the total population. Within the party a hard core of members exists who passionately dedicate themselves to the ideology without question and are prepared to assist in anyway possible in promoting the party, which often involves acts of violence. A system of terroristic police control is enforced which is directed towards enemies of the regime and both supporting but also supervising the party for its dictator. Also enforced is a technologically conditioned near-complete monopoly of control of all means of communications, such as press and radio, and also a monopoly of control of all means of effective armed combat. ...read more.

The censorship of mass media is one of the main factors contributing to the totalitarian nature of Fascist Italy. Initially, hostile newspapers were attacked by Fascist squads. In 1925 a law made prefects responsible for censorship. The Fascist party organised boycotts of some critical papers as well as magazines books. By 1926 the last opposition party papers has been suppressed, whilst others conformed, the majority through fear. The state controlled what the newspapers said, and also what they did not say. Reporting of most crime, disasters, unemployment and disorders was forbidden. Only journalists registered by the state and has joined a Fascist association were permitted to write in newspapers. By the mid-1930s the Press Office was able to exert effective control over what was published and what was not. The important decisions that could not be made by the Press Office were made by the prefects. On the whole, Mussolini's censorship of jounalism was more successful than other elements of his totalitarian state. Mussolini paid increasing attention to other aspects of the media from 1924 onwards. The expanding radio network was placed under control of the state, with the content of the programmes controlled completely by the state. Radio was used to spread Fascist ideas with two hours a day of official broadcasts whipping up excitement and national pride. ...read more.

These racial laws applied by Mussolini were never legislated effectively, which adds to the incompleteness of Mussolini's totalitarian fascist Italy. Mafia groups in southern Italy were never suppressed. These had often been perceived as opponents of far away governments in Naples before unification and then in Rome after unification. Government officials who got too vigorous in trying to collect taxes might be open to attack or even assassination. In rural areas Mafia groups would have considerable influence, and if someone had a problem, they went to the local don instead of the police or any other official organisation. The Fascists were unable to change this in any considerable manner, and in many areas the Fascists made agreements with the Mafia not to infringe in each other's realm. Conclusively, I believe that Italy did not exert nearly enough control over aspects of Italian life in order to impose a full totalitarian state. Mussolini had achieved some success, but had not been successful enough in key areas. The Fascist regime was forced to compromise with non-Fascist interest groups such as the Church, the Monarchy and the Mafia. If the need emanated, and eventually it did, the King could dismiss Mussolini at will. The Church still had considerable influence in sectors such as education. Also, Fascism had little influence in the South, and despite Fascist propaganda the South remained under Church and powerful landowners' influence. ...read more.