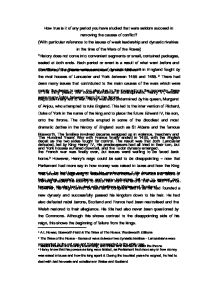 How true is it of any period you have studied that wars seldom succeed in removing the causes of conflict? (With particular reference to the issues of weak leadership and dynastic rivalries in the time of the Wars of the Roses )

How true is it of any period you have studied that wars seldom succeed in removing the causes of conflict? (With particular reference to the issues of weak leadership and dynastic rivalries in the time of the Wars of the Roses) "History does not come into convenient segments or small, contained packages, sealed at both ends. Each period or event is a result of what went before and contributes, to a greater or lesser extent, to what follows."1 The Wars of the Roses were a series of dynastic civil wars in England fought by the rival houses of Lancaster and York between 1455 and 1485.2 There had been many issues that contributed to the main causes of the wars which were mainly the desire to reign, but also due to the incapacity in the monarchy, there were many fights between them for the throne. In the thirty years, the trouble surrounds a schizophrenic Henry VI, whose ineptitude finally led to war. Henry was also undermined by his queen, Margaret of Anjou, who attempted to rule England. This led to the intervention of Richard, Duke of York in the name of the king and to place the future Edward IV, his son, onto the throne. The conflicts erupted in some of the bloodiest and most dramatic battles in the history of England such as St Albans and the famous Bosworth. The families involved became wrapped up in violence, treachery and deceit as the two sides fought for control. The result was that both Lancaster and York houses suffered downfall, and the Tudor dynasty emerged. The Hundred Years' War with France finally ended in 1433, with the English defeated, led by King Henry IV. His predecessors had all tried in their turn, but the French war was finally over, but issues were waiting to be faced back home.3 However, Henry's reign could be said to be disappointing - now that Parliament had more say in how money was raised in taxes and how the King ...read more.

It also came to a point in which Edward was due to marry. "When a King married it is usually to unite two important families and perhaps increase the amount of land they owned."16 Edward's advisors wanted him to marry the sister of the French queen, which was aimed to keep peace between England and France. However, just as arrangements for the marriage were nearly complete - the King admitted that he was already married - a widow from a family that supported the Lancastrians. Early in Edward's reign, he "apparently entered into a marriage contract with the widowed Lady Elenor Butler, a daughter of Old Talbot, 'the terror of the French', in order to coax her to bed."17 However, Elizabeth Woodville refused his proposition until they were married. "With extraordinary lack of foresight the King agreed to her terms and the couple were secretly made man and wife, 'after which spousals ended, he went to bed and tarried there for four hours'."18 The Earl of Warwick had negotiated with France King Louis XI for a treaty involved in a marriage between Edward and a French princess, which would then lead to the Earl to receive French lands and titles as his rewards. Edward's announcement of his marriage therefore gave a blow to the power hungry Earl. This was worse when he learnt that Elizabeth was from a family with a Lancastrian background. Edward then made it clear that he was not going to be under the control of the Earl, which angered the power hungry Earl, who then decided to become the Kingmaker again, in which he set Henry free from the Tower of London and made him king again.19 This show how even the barons wanted charge of the situation, not to become king, but be able to receive rewards from their negotiations such as the Earl and the French King. This is seen as another cause for the Wars of the Roses. ...read more.