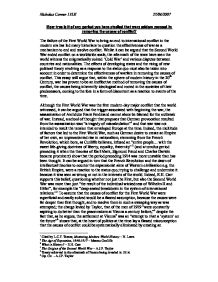 How true is it of any period you have studied that wars seldom succeed in removing the causes of conflict?

How true is it of any period you have studied that wars seldom succeed in removing the causes of conflict? The failure of the First World War to bring an end to international conflict in the modern era has led many historians to question the effectiveness of war as a mechanism to end and resolve conflict. Whilst it can be argued that the Second World War ended conflict on a worldwide scale, the aftermath of the wars have seen the world witness the enigmatically coined 'Cold War' and various disputes between countries and nationalities. The effects of developing states and the rising of new political theory evolving as a response to the status quo must also be taken into account in order to determine the effectiveness of warfare in removing the causes of conflict. This essay will argue that, within the sphere of modern history in the 20th Century, war has proven to be an ineffective method of removing the causes of conflict, the causes being inherently ideological and rooted in the societies of their predecessors, coming to the fore in a form of discontent as a reaction to events of the time. Although the First World War was the first modern-day major conflict that the world witnessed, it can be argued that the trigger associated with beginning the war, the assassination of Archduke Franz Ferdinand cannot alone be blamed for the outbreak of war. Instead, a school of thought that proposes that German provocation resulted from the assassination was "a tragedy of miscalculation"1 and that war was not intended to result the tension that enveloped Europe at the time. Indeed, the multitude of factors that led to the First World War, such as German desire to create an Empire of her own, an unprecedented rise in nationalism, stemming from the French Revolution, which bore, as Cunliffe believes, infused an "entire people... with the sweet life-giving doctrines of liberty, equality, fraternity"2 (and a tumulus period preceding it when the theories of Karl Marx, Sigmund Freud and Charles Darwin became prominent) ...read more.

Whilst a school of thought that exists which, supported by an earlier assessment by Taylor in 195017 at the beginning of the Cold War, argues that a post World War II settlement would learn from the mistakes of the past and produce a resolution that would satisfy all parties, the reality showed a conflict, once again, in ideology. The new threat of the Soviet Union, challenging the status quo of American supremacy and dominance at the end of the Second World War produced within the capitalist democracies a deep-seated fear that 'international revolution' preached first by Karl Marx in his theory of Marxism, and then by Trotsky and Lenin after the Russian Revolution in 1917, would occur and dismantle the social fabric of capitalism within Europe and beyond. The Yalta Conference, set up in February 1945 to allow deliberations over the future of Europe to take place, did little to relieve early tensions between what was to become two states embroiling for supremacy in a bi-polar world. In effect, Yalta exposed the vulnerability of the Western states and what they feared from their Communist partners in the East, whilst highlighting the potential for conflict in the future between these competing states, as highlighted by the 1962 Cuban Missile Crisis, when the U.S.A and the Soviet Union came closer than at any stage in world history full-scale nuclear war. The impact of the Second World War, however, did suggest that a shift in political thought would occur. Global politics, as Robbins believes, not only had an influence at the time, but moreover causes attitudes of the time to change as a reaction to the events that have taken place.18 In the same way as Carr believed Chamberlain to be a product of the post-war era,19 it can be argued that, in the same manner, Harry S. Truman, the American president in the wake of Franklin D. ...read more.

- E.H. Carr 4 The Origins of the Second World War - A.J.P. Taylor 5 Treaty achieved in the aftermath of France being invaded in 1814. 6 Op. Cit. - A.J.P. Taylor 7 The Inter-War Crisis - Richard Overy 8 Ibid. 9 Ibid. (Quote from Adolf Hitler in his sequel to Mein Kampf) 10 Ibid. 11 Op. Cit. - A.J.P. Taylor 12 Op. Cit. - E.H. Carr 13 The Legacy of the Great War - William R. Keylor 14 'Lebensraum' was the term Hitler coined for "living space" that he believed necessary in order for the expansion of Germany to be successful. 15 Mein Kampf - Adolf Hitler 16 Op. Cit. - E.H. Carr 17 Europe: Grandeur and Decline - A.J.P. Taylor. The significance of the date is that at this stage he agreed with the general consensus of historians i.e. Hitler was an evil dictator etc., whereas his notorious work, The Origins of the Second World War, published in 1961 at the very height of the Cold War suggests a chance in stance and attitude. 18 Appeasement - K. Robbins 19 Op. Cit. - E.H. Carr 20 This policy presented by Stalin enabled his rise to a dictator because it was seen as a 'safer' policy to continue with as opposed to the politically dangerous 'permanent international revolution' that Trotsky championed. 21 Marx: A Very Short Introduction - Peter Singer 22 The Cold War - Martin Walker 23 Ibid. 24 Direct quote - E.J. Hobsbawm 25 German philosopher, poet, and classical philologist, 1844-1900. One of the most provocative and influential thinkers of the 19th century, his beliefs on religion led him to conclude that the traditional values of Christianity which he believed to be amoral could be replaced by new values; his discussion of the possibility led to his concept of the 'overman' or superman, which was used by Hitler as a rationale to create a 'master race.' 26 The European Dictatorships: 1918-1945 - S.J. Lee 27 Ibid. 28 The Origins of the Second World War - A.J.P. Taylor 29 The Age of Empire: 1875-1914 - E.J. Hobsbawm Nicholas Corner 13LE 27/04/2007 ...read more.