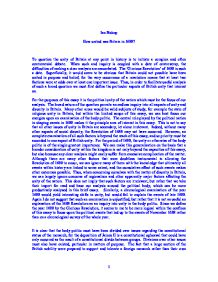 Ian Bishop How united was Britain in 1688? To question the unity of Britain at any point in history is to initiate a complex and often controversial debate. When such and inquiry is coupled with a date of controversy, the difficulties of making a clear analysis are exacerbated. The 'Glorious Revolution' of 1688 is such a date. Superficially, it would seem to be obvious that Britain could not possible have been united in purpose and belief, for the very occurrence of a revolution means that at least two factions were at odds over at least one important issue. Thus, in order to facilitate useful analysis of such a broad question we must first define the particular aspects of British unity that interest us. For the purposes of this essay it is the political unity of the nation which must be the focus of our analysis. The broad nature of the question permits an endless inquiry into all aspects of unity and disunity in Britain. Many other areas would be valid subjects of study, for example the state of religious unity in Britain, but within the limited scope of this essay, we can best focus our energies upon an examination of the body politic. The central role played by the political nation in shaping events in 1688 makes it the principle area of interest in this essay. This is not to say that all other issues of unity in Britain are secondary, let alone irrelevant. Indeed, without many other aspects of social disunity, the Revolution of 1688 may not have occurred. However, an complete examination of all such factors is beyond the reach of this essay, and so priority must be accorded to one aspect of British unity. For the period of 1688, the unity or otherwise of the body politic is of the single greatest importance. We can make this generalisation on the basis that a broader consideration of unity within the kingdom is not only beyond the capacities of this essay, but also because any clear analysis might easily suffer from excessive complication of the matter. ...read more.

James in this religious respect was in a far worse position: he was a Roman Catholic himself. There has been much debate over James's religious policy, and conclusions have varied. Some have proposed that James did indeed harbour absolutist intentions which he derived from his Roman Catholic philosophy, whilst others have defended his religious policy as actually being a policy of religious toleration and that his extra-parliamentary actions were intended to achieve a greater level of religious toleration in Britain. However, it is not actually of much importance, for the purposes of this essay, what James's actual motivation was. What is important is the fact that the Protestant British nobility saw James as a King attempting to impose popery over the 'lawful Protestant establishment in Church and State'2. It was this religious division that in many ways was to prompt the need for a new king, for James could never be reconciled in the minds of the gentry to Protestantism as he remained a Catholic. Thus, William of Orange became the Protestant 'Deliverer'. This outcome of the Revolution is a useful indication of the nature of divisions within England in 1688. The need for a Protestant saviour to take the throne represents the desire of the nobility to keep the constitutional status quo stable by dismissing any notion that kingship was being called into question. Indeed, both Whig and Tories stated that James II had not been forced to abdicate, but rather that he had forfeited his right to the throne and had been replace. William himself had said that his aim in coming to England was to assist James. This policy was adopted in order that the gentry might keep careful control of events. They well remembered the near catastrophic political collapses in the 1640-60 period, when there was the perception of constant danger from Leveller-inspired notions of popular sovereignty and equality. The religious license during the turmoil of the civil war period would also have been a cause of fear for the nobles in 1688, who would not wish to see the Church of England threatened. ...read more.

Indeed, I do not actually believe that it is possible to answer such a question at all, and so a more limited investigation is not only more practical, but also more useful. However, it is possible to conclude in terms of the parameters I set for our analysis at the beginning of this essay, and I believe that we can assert such conclusions with a reasonable degree of confidence. The body politic was not a homogenous entity by 1688. The King had antagonised his nobles, and it was this rather than any inherently gregarious political feeling among the gentry that unified them briefly in opposition to him. This unity was never a permanent feature, nor was it intended to be. It was only the birth of James's son that galvanised the nobles, or at least a significant section of them, into acting in a united manner. Equally, the settlement with William and Mary was only accomplished so swiftly and with so little conflict because the gentry was once again united by external factors, in this case the fear that the constitutional upheaval caused by the effective dethroning of James might allow radicalism to take root. At the end on 1688 Britain was no more united than it had been at the beginning of the year. The Revolution represented a compromise between a divided nobility that shared a fear of constitutional radicalism inherited from the civil war forty years previously. 1 For the sake of simplicity, I have used the term 'noble' to refer to those significantly involved in politics at this time. The term has been used primarily to mean Members of Parliament, but I have also used it to encompass any member of the gentry who was politically involved at the time. I take the term from the conventional description of the seven dissident 'noblemen' who invited William of Orange to come to England. 2 Robert Beddard, The Revolutions of 1688, (1991), p 1. ?? ?? ?? ?? 1 1 ...read more.