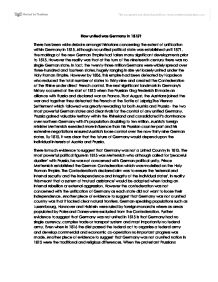 How united was Germany in 1815? There has been wide debate amongst historians concerning the extent of unification within Germany in 1815. Although no unified political state was established until 1871, the makings of the new German Empire had taken many significant developments prior to 1815. However the reality was that at the turn of the nineteenth century there was no single German state. In fact, the twenty-three million Germans were widely spread over three-hundred and fourteen states, hugely ranging in size yet loosely united under the Holy Roman Empire. However by 1806, this empire had been defeated by Napoleon who reduced the total number of states to thirty-nine and created the Confederation of the Rhine under direct French control. The next significant landmark in Germany's history occurred at the start of 1813 when the Prussian King Frederich III made an alliance with Russia and declared war on France. ...read more.

Another major factor was that although Prussia and Austria had recently started to co-operate, they would both still be rivals for leadership of any unified Germany. Historian David G. Williamson stated concerning Metternich intentions at the Vienna Settlement that Metternich 'intended to exploit the role allotted to Austria of President of the Diet....and ensure that the Confederation did not evolve into a federal state. Clearly Prince Metternich did not consider Germany a unified nation in 1813 and was anxious to prevent this from occurring. Another reason for my conclusion that Germany was not a united nation in 1815 is that although the German Confederation was modelled on the Holy Roman Empire, many German-speaking populations were excluded and areas peolped by poles included. Despite recent progress there was still no real single concept of German nationalism. In fact in 1815 did not have many of the essential characteristics for a democratic nation. It had no elected government or central authority, it had no single currency, no common language, no common religeon and probably most importantly no common background. ...read more.