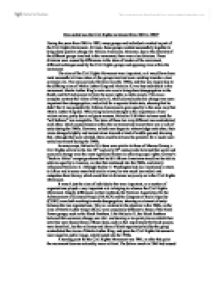 How united was the civil rights movement

How united was the Civil Rights movement from 1865 to 1992? During the years from 1865 to 1992, many groups and individuals worked as part of the Civil Rights Movement. At times, these groups worked successfully together to bring about positive change for African Americans. However, due to the diversity of the different groups involved in the movement, there were also divisions. These divisions were caused by differences in the ideas of leaders of the movement, different techniques used by the Civil Rights groups and opposing aims within the movement. The aims of the Civil Rights Movement were important, as it would have been most successful at times when all the groups involved were working towards a clear common aim. The main period of division was the 1960s, and this was largely due to the differing aims of Martin Luther King and Malcolm X, two key individuals in the movement. Martin Luther King's main aim was to bring about desegregation in the South, and for black people to have the same rights as white people. This was a complete contrast the views of Malcolm X, who believed economic change was more important than desegregation, and called for a separate black state, showing that he didn't feel it was possible for African Americans to gain equality in the same way that Martin Luther King did. ...read more.

The early 1960s were a time when all Civil Rights groups felt they could work together, as the Council of Community Organisation was formed in 1963, creating a sense of unity between different groups. The 1963 march on Washington showed how united the movement was at this point, as the majority of Civil Rights groups took part, including the SCLC, SNCC and CORE. All the groups seemed to have a similar sense of purpose, showing that, although they may have had differing views and ideas, they were willing and able to work together, because as well as taking part, all three groups helped plan the march. The march also demonstrated how, at this point, the movement had a lot of white support, increasing the sense of unity and showing the growing popularity of the movement. The 1960s wasn't the first time there had been signs of division in the movement, as the NAACP and CORE had been seen as opposing groups since the Second World, when CORE was formed. The NAACP focused completely on taking the legal route, presenting cases of discrimination to the Supreme Court in order to get desegregation and acts of racism declared unconstitutional. This contrasts with the more direct approach of CORE, who, while not supporting violent action at this point, used more direct forms of protest than the NAACP. ...read more.

At this time, Congress generally supported the ideas of Kennedy, and were willing to pass legislation to help advance Civil Rights. This could have been because of the growing popularity of the movement, or the fact that a number of protests and marches held in the early 1960s, when the movement was relatively united, had successfully raised awareness of the problem faced by black people. The cooperation of Congress continued into the 1980s, when it was very liberal and willing to pass more Civil Rights legislation, such as the 1982 Voting Rights Act, despite the fact that President Reagan wasn't cooperative like Kennedy. Even when the Federal Government wasn't united in its views towards Civil Rights, it was still possible to make progress. The same idea can be applied to the Civil Rights Movement itself, as, despite the divisions that were sometimes present, the movement was still able to make significant progress. The lack of unity wasn't severe enough to greatly hinder the movement, and could almost be seen as a positive thing, as the differences were mainly based around the differences between North and South. The different approaches meant that all areas were being covered, and all the relevant issues were being dealt with. This made the Civil Rights Movement successful, and examples of unity, such as the 1963 march on Washington, show that despite their differences, groups within the movement could work together when they needed to. ...read more.