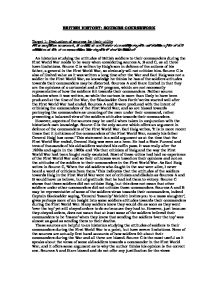 How useful are sources A, B and C to an historian studying the attitudes of British soldiers to their commanders during the First World War?

None of the sources are actually first hand accounts of how soldiers felt about their commanders during the War and all three are biased. Source C is the most useful as it speaks about the views of some old soldiers towards a commander in the First World War, and it offers some argument as to why the author thinks his opinion is the correct one. Sources A and B are biased and do not offer any justification for the views expressed in them. The messages expressed in each source may be representative of how some of the soldiers felt about their commanders, but neither Sources A, B or C are able to capture the attitudes of every soldier towards their commanders during the First World War. So while each source may be helpful to an historian in some respect, they need to be looked at along with other sources, accounts and knowledge for a valid conclusion to be reached about the attitudes of soldiers towards their commanders during the First World War, if indeed, a conclusion can be drawn. ...read more.