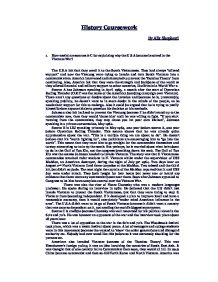 How useful are sources A-C for explaining why the U.S.A became involved in the Vietnam War?

History Coursework By Alix Shepherd 1. How useful are sources A-C for explaining why the U.S.A became involved in the Vietnam War? The U.S.A felt that they owed it to the South Vietnamese. They had always "offered support" and now the Vietcong were trying to invade and turn South Vietnam into a communist state. America intervened and attempted to prevent the 'Domino Theory' from continuing. Also, America felt that they were the strength and backbone of the world as they offered financial and military support to other countries, like Britain in World War 2. Source A has Johnson speaking in April 1965, a month after the start of Operation Rolling Thunder (O.R.T was the name of the American bombing campaign over Vietnam). There aren't any questions or doubts about the invasion and because he is, presumably, speaking publicly, he doesn't want to in store doubt in the minds of the people, as he needs their support for this to undergo. Also it could be argued that he is trying to justify himself before anyone thinks to question his decision or his methods. Johnson also felt inclined to prevent the Vietcong because if he didn't stand up to the communists now, then they would 'chase him' until he was willing to fight. ...read more.

The actual effect of the bombing is shown in source E, where there is a little girl covered in napalm. Napalm was a thick jelly like substance that stuck to the skin and for as long as it was in contact with the air, it would burn, all the way down to the bone. This picture was one of the most horrific in the war. It became a poster for anti-war demonstrations, showing that the Americans were indiscriminate. There was much deliberation over the Vietnam War because it was so publicised and open with the media. The amount of media attention towards the war was remarkable. Source F also shows the difficulty of fighting a guerrilla war. It points out the simple problem of basic knowledge of the jungle and that the Americans didn't have any! Also how they weren't winning any respect by burning down the villages that were suspected to be harbouring Vietcong. The Americans were murdering civilians, dropping hundreds of thousands tonnes of napalm and drowning the jungle in 'Agent Orange', a weed killer which destroyed the coarse, thick trees. American soldiers re-told their tales to newspapers or in television studios. In source G, a solider gave his reactions to the 'My Lai' massacre, shooting of innocent South Vietnamese civilians. ...read more.

Source J is very beneficial when answering the question. Nobody protested against WW2 because all the massacre and truth was kept hidden away, but because of all the easily accessible pictures etc, it was extremely easy for protesters to find something. All anti war demonstrations were all keep on television as well. Source K is also to do with television because in history, the country always wanted their men still fighting but because all the Australian's could see what was happening to their men and to the American soldiers, they were against the war. Source L is incredibly helpful because all the views are to do with the fact that television had something to do with losing the war. They all agree that it did. In conclusion, I believe that television did play a role in America losing the war but because of the problems that they faced with Guerrilla warfare anyway, it wasn't that important. No one in the media wanted to draw attention to them so the kept blaming the fact that it was a Guerrilla war and the Government didn't want to admit that they had lot a war for the first time so they blamed it on the press. It's too difficult to say really, but both are just reasons. ...read more.