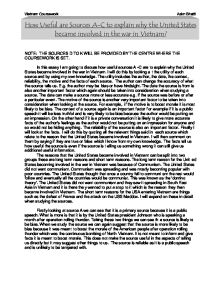 How Useful are Sources A-C to explain why the United States became involved in the war in Vietnam?

NOTE: THE SOURCES D TO K WILL BE PROVIDED BY THE CENTRE WHERE THE COURSEWORK IS SET. In this essay I am going to discuss how useful sources A-C are to explain why the United States became involved in the war in Vietnam. I will do this by looking at the utility of each source and by using my own knowledge. The utility includes the author, the date, the context, reliability, the motive and the facts of each source. The author can change the accuracy of what the source tells us. E.g. the author may be bias or have hindsight. The date the source is from is also another important factor which again should be taken into consideration when studying a source. The date can make a source more or less accurate e.g. If the source was before or after a particular event. The motive of the source is another very important factor to be taken into consideration when looking at the source. For example, if the motive is to boost morale it is most likely to be bias. The context of a source again is an important factor for example if it is a public speech it will be less truthful and is very likely to be bias because the author would be putting on an impression. On the other hand if it is a private conversation it is likely to give more accurate facts of the author's feelings as the author would not be putting on an impression for anyone and so would not be hiding anything. The reliability of the source is also an important factor. Finally I will look at the facts. I will do this by quoting all the relevant things said in each source which relate to the reason that the United States became involved in Vietnam. I will then comment on them by saying if they are true or false which I know from my own knowledge. ...read more.

This would help to locate their positions. On August 2, 1964, the US destroyer, "Maddox", which was still in the area, was fired upon by three North Vietnamese torpedo boats in the Gulf of Tonkin. In retaliation, "Maddox" fired back and hit all three, one of which sank. The "Maddox" then retreated into international waters but the next day it was ordered to return to the Gulf of Tonkin. In August 1964 it was the scene of the Tonkin Gulf Incident between American destroyers and North Vietnamese vessels, which was used by President Johnson as the basis for a congressional resolution increasing US military involvement in the Vietnam War. Soon after entering North Vietnamese waters, Captain Herrick reported that he was under attack. However, later he sent a message that raised doubts about this: "Review of action makes reported contacts and torpedoes fired appear doubtful. Freak weather reports and over-eager sonar men may have accounted for many reports. No actual sightings by "Maddox". Suggest complete evaluation before further action." Johnson now had the excuse he had been waiting for and ignored Captain Herrick's second message. He ordered the bombing of four North Vietnamese torpedo-boat bases and an oil-storage depot that had been planned three months previously. President Johnson then went on television and told the American people that: "Repeated acts of violence against the armed forces of the United States must be met not only with alert defence, but with a positive reply. That reply is being given as I speak tonight." The Congress approved Johnson's decision to bomb North Vietnam and passed what has become known as the Gulf of Tonkin resolution by the Senate by 88 votes to 2 and in the House of Representatives by 416 to 0. This resolution authorised the President to take all necessary measures against Vietnam and the NLF. Johnson now had the power to escalate or step up the level of American military involvement. ...read more.

Cambodia, a neutral neighbour, was bombed by the US 1969-75, with 1 million killed or wounded. Following the division of French Indochina into North and South Vietnam and the Vietnamese defeat of the French 1954, US involvement in Southeast Asia grew through the SEATO pact. Non-communist South Vietnam was viewed, in the context of the 1950s and the Cold War, as a bulwark against the spread of communism throughout Southeast Asia. The source then questions the reason for the United States for moving into Vietnam and goes on to say "The US did not want an independent South Vietnam". This again backs up my own knowledge that the US were in Vietnam to stop communism spreading in South East Asia due to the 'domino theory' which suggests that when one country falls to communism the rest will follow. I conclude that this source tells us that people are opposed to the war. Even though the author is an American critic of the war the source still backs up my own knowledge. The source is not useful as it is a secondary source and could have been tampered with and because the author has hindsight. The source being by a Russian could be bias but the source backs up my own knowledge. I finally conclude that the Source C is the most useful, then it is source B and the least useful is Source A. My reasons for source C being the most useful are because it backs up my own knowledge to why the United States became involved in Vietnam. Source B contradicts source A even thought they are by the same author. This is because the two sources are of a different motive. Source B being a private conversation, with no motive and expressing the Presidents true feelings and backing up my own knowledge comes in Second place. Source A being a public speech with a motive to boost morale and backing back some of my own knowledge comes as the least useful when deciding which is most useful to explain why the US became involved in Vietnam. Vietnam Coursework Asim Bhatti ...read more.